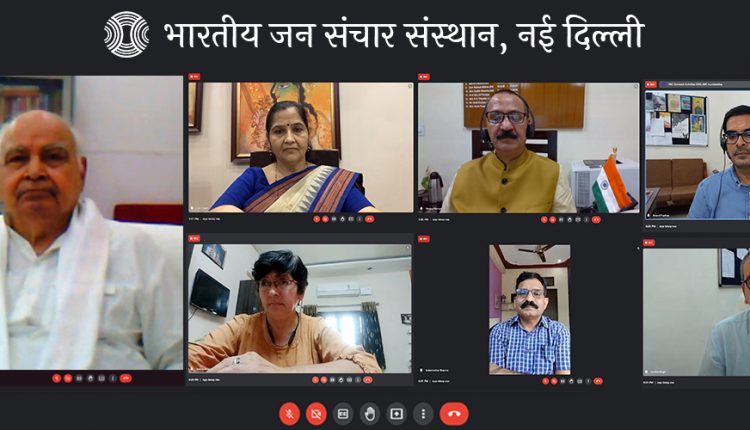 New Delhi: “Pt. Madhavrao Sapre was the pioneer of Indian Reawakening. Today’s India is the result of Sapre’s hardwork. His whole life is an example of struggle and hardwork.” this view was expressed by the Speaker of Uttar Pradesh Legislative Assembly, Shri Hriday Narayan Dixit in the discussion organised by the Hindi Journalism Department of the Indian Institute of Mass Communication on the occasion of the 150th birth anniversary of Pt. Madhavrao Sapre. In the event, senior journalist and editor of ‘Sahitya Parikrama’, Dr. Indushekhar ‘Tatpurush’, eminent story writer Smt. Jaya Jadwani and head of literature department of Bhartiye Sanskriti Sansad, Kolkata, Dr. Tara Dugad also expressed their views. Director General of Indian Institute of Mass Communication Prof. Sanjay Dwivedi was also present on the occasion.

Speaking on the topic ‘National awakening in journalism of Pt. Madhavrao Sapre’ Shri Hriday Narayan Dixit said that Sapre ji worked to awaken nation through his writings based on Indian Vedic tradition and culture. On reading his essays, it is known how wide the scope of his knowledge was. He said that his contribution to Hindi journalism and development of Hindi language can never be forgotten.

According to Shri Dixit, Great personalities have the ability to walk two steps ahead of their time. Sapre ji’s writings reveal how he attempted to establish a new system through journalism. He tried to create a society where his future generations could live with happiness and peace.

Dr. Indushekhar ‘Tatpurush’ said that Sapre ji believed that the goal of independence can be achieved only by being united. Remembering Sapre ji on the occasion of his 150th birth anniversary is equivalent to remembering the ancestors who gave us language and culture. He dedicated his whole life to that dream, so that this country and its people could breathe the air of freedom.

Vice President appeals to schools to foster spirit of…

Smt. Jaya Jadwani said that Sapre ji was an all-rounder. He was a prolific journalist and also a skilled writer. He is credited with writing the first original Hindi story. Sapre ji used his stories to spread the message of humanity throughout society.

Dr. Tara Dugad said that Sapre ji used to write more and speak less. Through his writings, he worked to bind the indian public in one thread. Sapre ji chose the route of adversity and struggle, abandoning the means and facilities. He said that Pt. Madhavrao Sapre considered journalism as a weapon of social awareness. In adverse circumstances, he worked to awaken self-realization among the people of India.

Welcoming the guests in the program, IIMC Director General Prof. Sanjay Dwivedi said that Pt. Madhavrao Sapre did the work of taking the Indian society from self-forgetfulness to self-introduction. He said that India is preparing to celebrate the Amrit Mahotsav of its independence. The purpose of celebrating Amrit Mahotsav is to remember our ancestors and follow their thoughts.

The program was moderated by the Course Director of Hindi Journalism Department, Prof. Anand Pradhan & vote of thanks was given by Dean (Academic) Prof. Govind Singh.

Pontificia Universidad Católica de Chile: University will deliver degrees with distinction of sex in all its programs and careers

Vice President appeals to schools to foster spirit of curiosity, innovation and…