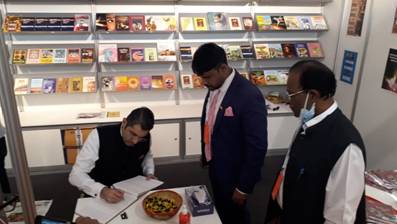 Consul General of India in Dubai, Dr. Aman Puri writing words of appreciation for Publications Division (DPD) at the inauguration of DPD stall at SIBF 2021

India leads the international participation in SIBF 2021 with 87 publishers, including Publications Division, among 1566 publishers presenting their books at the fair. The much awaited international book fair brings celebrated authors and stalwarts like Amitav Ghosh, Chetan Bhagat and child prodigy from America Gitanjali Rao, an inventor, scientist, STEM promoter, and the first child to be featured by Time magazine in 2020 as ‘Kid of the Year’, under one roof.

Continuing the celebrations of Azadi Ka Amrit Mahotsav, Publications Division will be offering the readers and books enthusiasts with more than 150 books on history of Indian freedom struggle and freedom fighters. The readers will also get to explore books and magazines in different Indian languages on themes such as art and culture, history of India, eminent personalities, language and literature, Gandhian literature, religion and philosophy and children’s literature, along with premium books on Rashtrapati Bhawan and Prime Minister’s speeches, published exclusively by the Publications Division.

Publications Division, Ministry of Information and Broadcasting, Government of India is participating in the 40th Sharjah International Book Fair (SIBF 2021), one of the most acclaimed book fairs of the world. The 11-day international book fair, organised by the Sharjah Book Authority (SBA), is being held from November 3-13, 2021 at Expo Centre Sharjah, UAE and will host a stellar lineup of literary luminaries from around the world, including 2021 Nobel Laureate for Literature, Tanzanian novelist Abdulrazak Gurnah and screenwriters of Netflix blockbuster series ‘Money Heist’. This year’s theme is ‘There’s always a right book’.

The star-studded event will witness participation of 85 writers and intellectuals who will lead the fair’s 970 events and activities including literary discussions, workshops, conferences, seminars, cultural shows, concerts, theatre and much more. Food lovers will also get a chance to meet Chef Kunal Kapur at the SIBF Cookery Corner.

Directorate of Publications Division is a repository of books and journals which highlight the subjects of national importance and India’s rich cultural heritage. Established in 1941, Publications Division is a premier publishing house of Government of India offering books and journals in different languages and on diverse themes like development, Indian history, culture, literature, biographies, science, technology, environment, and employment. The Division enjoys credibility among readers and publishers and is well recognized for the authenticity of content as well as reasonable price of its publications.