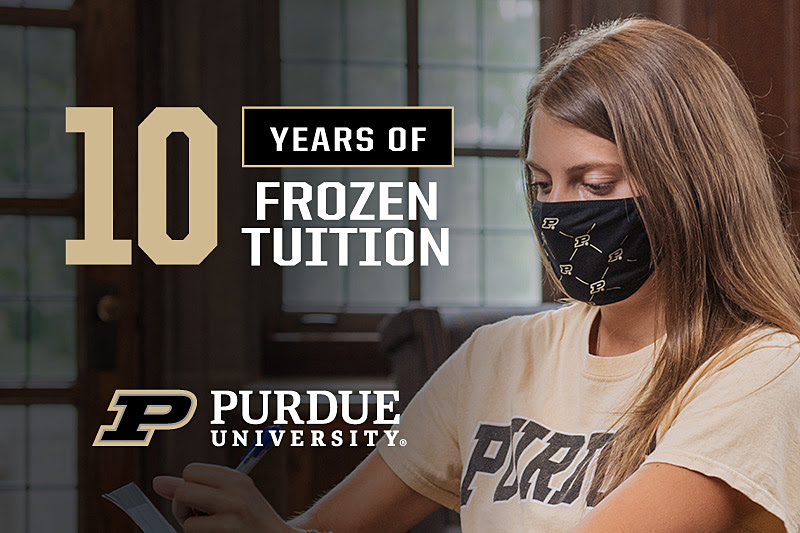 “Unprecedented” has been used often in 2020. Purdue University is using it yet again – as the university announces it will keep its West Lafayette campus tuition frozen — at 2012-13 levels — through at least 2022-23, marking 10 straight years of no tuition increase — unprecedented at Purdue and in higher education during modern times.

President Mitch Daniels first announced that the university would not increase tuition in spring 2013, shortly after he became the 12th president of Purdue University. Before that, Purdue tuition had increased every year since 1976, and it rose an average of nearly 6% per year from 2002 through 2012.

Since 2013, Purdue students and their families have seen tuition remain flat and room and board rates drop from second highest in the Big Ten to the most affordable. Today, they pay less for total cost of attendance than they did in 2012.

In all, by spring 2023, some 60,000 students will have graduated from Purdue having never seen an increase in their tuition rates.

“We said very early on that we believe strongly that our students and their families deserve a high-value education that they can afford and that we will fit our spending to their budgets — not the other way around. Purdue is a national leader in the value of its degrees, and we intend to increase that value further,” Daniels said. “Our story remains the same. As long as we are balancing our operating budget, growing our faculty, and investing in necessary projects, we see no good reason to charge our students more. Our commitment to affordability has helped save families millions of dollars and, coupled with prioritizing our investments, we continue to believe that Purdue is delivering higher education at the highest proven value.”

To be formally approved by Purdue trustees in late spring 2021 per state statute, base undergraduate tuition at Purdue will remain at $9,992 per year for Indiana residents and $28,794 for out-of-state students through 2022-23. Students and their families will have saved more than a billion dollars on educational and living expenses by 2023, versus what they would have paid if Purdue had increased tuition and fees at Big Ten institution averages over the 10 years of the freeze.

Students and their families also are better able to manage the cost of college — total student borrowing is down 32% since 2011-12, and the loan default rate for Purdue borrowers is 2.2%, compared with 7.1% for the average borrower from a four-year public university and 5.1% for Purdue borrowers in 2011.

Affordability measures and attention to value continue to drive students and their families to choose Purdue, which this year saw its largest freshman class ever at 8,925 and its overall largest student body at 45,869.

New dinosaur showed descendants how to dress to impress