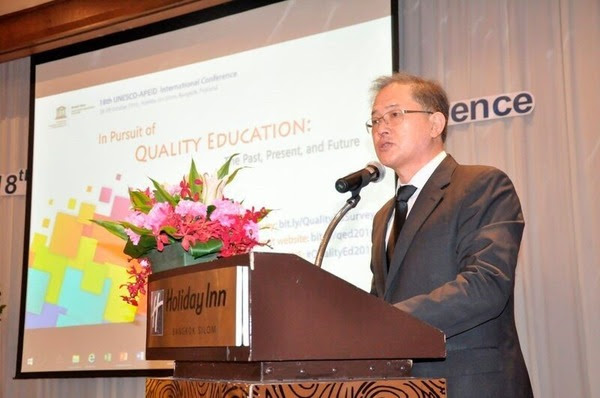 By India Education Diary Bureau Admin Last updated Apr 23, 2020
Share
Bangkok: “To make sense of an increasingly interconnected world, we need new and innovative ways of thinking and actions – this requires quality education at all levels,” said Dr Gwang-Jo Kim, Director of UNESCO Bangkok, the Asia-Pacific Regional Bureau for Education at yesterday’s opening of the 18th UNESCO-APEID International Conference: In Pursuit of Quality Education: The Past, Present and Future.
The three-day conference brings together about 180 policy-makers, researchers, academics and teachers to explore what quality education means, discuss key obstacles and share innovative practices that are improving learning throughout the region.
The theme of the conference, “In Pursuit of Quality Education: The Past, Present and Future,” is a timely one, Mr Kim said, as the international community moves forward in pursuit of Sustainable Development Goal 4, which calls for all countries to “ensure inclusive and equitable quality education and promote lifelong learning.”
“Education has a responsibility to foster the right type of skills, attitudes and behavior that will lead to sustainable and inclusive growth. This requires transformative education… Ultimately we are talking about education that will change ourselves and those around us,” Mr Kim said. “Sustainable Development Goal 4 and the Education 2030 Agenda were clearly formulated to capture this vision.”
In his remarks to officially open the conference, Thai Education Minister General Dapong Ratanasuwan (pictured) paid tribute to His Majesty King Bhumibol Adulyadej of Thailand, who passed away on 13 October, with a special presentation the late King’s development works, particularly in education. Gen Dapong said that His Majesty’s sufficiency economy philosophy was “100% in line with the United Nations Sustainable Development Goals …. The current government will continue to follow His Majesty’s footsteps.”
The Education Minister noted that while all countries in Asia-Pacific have the same deadline to achieve the Education 2030 goals, “the distance from the starting points to these achievements is not equal for all”.
Related Posts

Swinburne University of Technology: The colours of hydrogen…

May 19, 2022
“What should we do to [ensure that] all countries in the Asia-Pacific region achieve the Education 2030 Agenda in due time considering our contexts and levels of development are vastly different?” General Dapong asked. “[One solution] is to select the best practices that are feasible and can be adapted to each country’s context.”
Kishore Mahbubani, Dean of the Lee Kuan Yew School of Public Policy, Singapore, delivered the conference’s keynote Raja Roy Singh Lecture, asking the question, “Can Asia be the next higher education superpower?”
Mr Mahbubani argued that we are entering a “a new era in world history” where Asia would assume increasing prominence and where Asian universities would play an increasingly important role.
He cited China as a country where a “miracle in higher education” had taken place, with the country’s cohort participation rate in higher education going from 3% in 1990 to 30% in 2013. Mr Mahbubani also highlighted India’s success, where the rate has gone up from 6% in 1990 to 24% in 2013. However, Mr Mahbubani noted, quality of higher education in both countries has not kept pace with the rapid expansion in quantity – a situation common elsewhere in Asia and one that he says must be addressed for the region to assume a leading role in higher education.
Improved cooperation between universities from different countries throughout the region would also be a bridge to improved relations and mutual understanding, he said. “Universities need to show some real political courage and say: regardless of international divisions, we are universities, we are custodians of the heritage of humanity. We will not be bound or affected by temporary political rivalries,” Mr Mahbubani said. “If Asian universities can show that kind of political courage, we will end up with a better world, and a world where Asia will finally emerge as a higher education superpower.”
Among the themes to be explored during the conference, which concludes on Friday, will be: concepts and frameworks of quality education; innovations for increasing the quality of education; assessment, monitoring and evaluation of quality education; and effective policies and strategies for quality education.
Share FacebookTwitterGoogle+ReddItWhatsAppPinterestEmail