Qutub Minar echoes with the sounds of The Sufi Route concert

New Delhi: Saturday night in the Capital witnessed historic events in more ways than one as The Sufi Route, a concert for peace, was held at the Qutub Minar, one of the most iconic monuments of India. Curated by Friday Filmworks, INvision Entertainment and Invloed Matrix, The Sufi Route left scores of attendees enthralled by Sufi music and dance performances. It was one of its kind first ever successful Sufi concert in India. The artists comprised the legendary AR Rahman, lyricist Javed Akhtar, Nooran Sisters, Hans Raj Hans, Mukhtiar Ali, Kamna Prasad Sood, Fouzia & Firoz, Dhruv Sangari, Whirling Dervish ceremony from Turkey and an Israel artist.

Conceptualized as the first of many steps to spread the charm of Sufi poetry the world over, The Sufi Route’s debut edition was as much about peace and inclusion. By partnering with Nobel Peace Prize winner Kailash Satyarthi’s Children’s Foundation for the ‘100 Million for 100 Million – A Billion Acts for Peace’ campaign, the promoters of the concert will help the Foundation connect with a wider audience and create awareness about their projects. It is a five-year journey towards peace and Sufi route is also looking out for global sponsors and partners. In another first, the concert became the first of its kind in India to have given first-hand experience of a live music event to hearing impaired students from Centrum-GRO, an advanced skill training center for the deaf.

The performances at The Sufi Route opened with a poetry session featuring a range of artists reciting works by renowned saints. Masters of ‘Dastangoi,’ traditional storytelling, Fouzia & Feroz recited poems written by Danish Iqbal “Hazrat Amir khusro Ki”. Kamna Prasad Sood was the host of the poetry session who also recited some of her famous shayari and poetry. Indian lyricist and television screenwriter Manoj Muntashir also rolled out some of his favourite shayari. The headliner of the poetry session however was lyricist Javed Akhtar who gave a breathtaking poetry recitation of “Ek Aansu”

The celebration moved to music with the splendid performance of Mukhtiar Ali, from the 26th generation of the Sufi singers who performed on “Al – Kabir” along with other songs. Following him, the Nooran Sisters showcased their well-rooted linguistic and musical traditions through their songs like Sayoni, Allah Ho Fakira Di, Main yaar mangda bas pyar mangda. Padmashri awardee Hans Raj Hans performed some of the popular tracks like Duma Dum Mast Kalandar, Nit Khair Maangda, Ishq di gali wichon koi koi laangda from the movie Kacche Dhage. And with the music, the dance of the Whirling Dervish troupe from Turkey which showcased Sufi culture spanning eight centuries added to the magical vibe. Qawwali and classical maestro Dhruv Sangari too made it a memorable evening with Kab Mori Nayya Paar karo tum, Chhaap Tilak Sab Chheeni Re and many more.

That said, the one performer whom hundreds of music lovers from across Delhi had braved the smog for, A R Rahman, truly took the concert to a celestial level. Rahman, a proud exponent of Sufi music, plunged in to the evening with his soulful renditions of Kun Faya Kun, Allah Huma Salle Alla, , Arziyaan Sari Main, Phool Khile Baagiyan and many more. The evening was made even special by the performance of A R Rahman’s son who is following the footsteps of his father. Sana from Israel, who is a Palestinian with two passports, also performed along with Rahman. 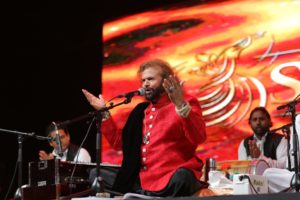 Exhilarated to have pulled off the occasion, Shital Bhatia of Friday Filmworks, promoter of The Sufi Route said, “We had spent the past months of our lives putting this event together as we knew the music will make it worthwhile. But going by tonight, the performances left us speechless too.”

Namrata Singh of Friday Filmworks, Co-owner and In-charge of Alliances and Partnerships of The Sufi Route said, “The concert’s peace initiative, its support for the rich history of Sufi music and its range of performers were all important statements by themselves. Our team is proud to have begun this historic, inclusive, global journey.”

Gagan Takyar of INvision Entertainment, Event Organiser and Co-Owner said, “Sometimes, the venue of a concert speaks as much as its music and dance, and to see our own Qutub Minar as the background of something so beautiful was a great sight. 20 years after the maestro Yanni’s performance by the Taj, this was as special.”

Priyanka Arora of INvision Entertainment, Event Organiser and Director said, “This was the first ever successful Sufi Route concert and it is a very big achievement for us. At this edition of The Sufi Route we are also proud to announce our five year long journey towards peace by partnering with Nobel Peace Prize winner Kailash Satyarthi’s Children’s Foundation for the ‘100 Million for 100 Million – A Billion Acts for Peace’ campaign. It was also our pleasure to host students of Centum-GRO who also had an experience of their life by feeling the Sufi music.”

Madhya Pradesh to be made hub of start-ups with young entrepreneurs’ assistance: CM Shivraj Singh