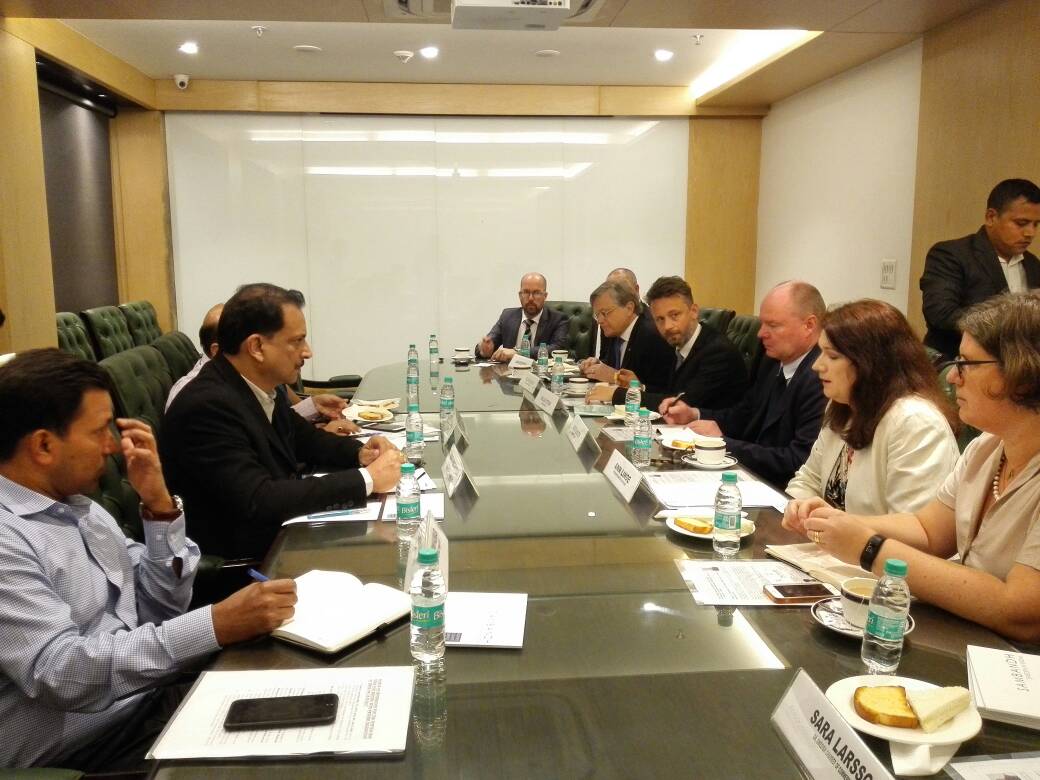 New Delhi: Contributing to the dream of New India and exploring new and greater partnerships in the global skills agenda, Shri Rajiv Pratap Rudy, Union Minister of State for Skill Development and Entrepreneurship (MSDE) met up on Thursday with a Swedish delegation led by Ms Ann Linde, Sweden’s Minister of EU Affairs and Trade and Foreign Affairs Minister. The delegation is here in the country to discuss ease of doing business in India.

Discussing the partnership between the countries, Ms. Linde said, “India and Sweden have had a long standing business relationship since years. Swedish companies directly employ 1,85,000 people in India, while creating up to 1.3 million jobs indirectly. We are keen to work closely with the Indian government to take this working relationship to greater heights. Skill India would play a crucial role in this as we would seek for local talent to support our businesses here in the country.”

Recently the embassy of Sweden in India and the Swedish Chamber of Commerce has come out with the 9th edition of their Business Climate Survey report for India. Ms Ann Linde played the lead role in the launch of this Business Climate Survey. Notably, she has led several Business delegations for Sweden across the world. In the last two years, employment through Swedish companies and investors has grown by 20 percent.

Assuring India’s commitment to Sweden on the skill development agenda, Shri Rudy said, “Skill development is forming the backbone for all successful businesses in India. We have more than 1913 job roles identified and mapped to our National Skills Qualification Framework (NSQF) and many of them are matched to transnational standards making it easy for us to have ready a workforce for all kinds of sectors and jobs. We as a country have had great trade relations with Sweden but we are yet to explore partnerships on skill development. We will be happy to support and partner with Sweden in the best possible way.”

Shri Rudy mentioned that India has been working with countries like UK,US, Canada, Australia, Germany, France and many other such countries. He mentioned that it would be fruitful for Sweden and India to benchmark skill standards that would enable ease of recognition of skills between the two countries.

Shri Rudy also informed that that MSDE in partnership with the Ministry of External Affairs, would also be providing training to overseas employment through its India International Skill Centres. He also mentioned that key role of Swedish companies in India in engaging apprentices. It was decided in the meeting that the two sides will indentify some concrete activities and deliberate on a constituting a Joint Working Group through an MoU between the two countries.

Early in the year during Vibrant Gujarat, Shri Narendra Modiji, Hon’ble Prime Minister of India has expressed happiness on the Indo- Sweden partnership and had said that India has offered considerable potential for Swedish investment in green technologies, smart cities, skill India and Digital India. He had also stated that it has been a two way investment with Swedish companies having invested $1.2 billion in India and Indian companies $700 million in Sweden.