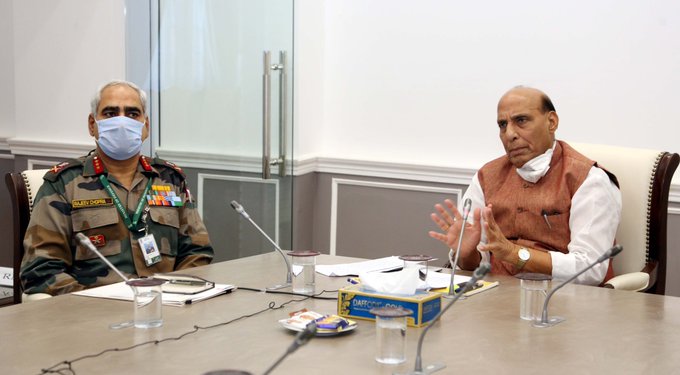 Raksha Mantri congratulated Director General of MP-IDSA, Ambassador Sujan R Chinoy, all the members of the EC and other scholars for discharging their duties despite the limitations imposed due to COVID-19. He noted that the Institute had successfully been able to overcome constraints in movement of some scholars and staff and yet maintain the tempo of outreach and research through their writings and webinars, in light of the COVID-19 pandemic. The MP-IDSA was one of the first institutions to reopen amidst restrictions, while at the same time taking appropriate safety measures and following the social distancing guidelines.

Shri Rajnath Singh acknowledged the contribution of MP-IDSA as a key Institute that conducts quality research in defence, security and international relations. Over the years, the Institute has worked diligently towards establishing extensive linkages with the armed forces, central police organisations and paramilitary forces, research establishments of the Government and universities across different states of the country. Its wide ranging exchanges with a large number of think tanks, both domestic and international, provides an opportunity for scholars to interact in an atmosphere where free and frank views and opinions can be exchanged. This brings alternative perspectives and fresh inputs into the policy making domain through the cross-pollination of ideas.

Wishing MP-IDSA well for its future endeavours, the Raksha Mantri urged the scholars to apply themselves towards generating new ideas to overcome the challenge of resource constraints, imposed on the economy due to the unprecedented crises, especially for defence modernisation.

Shri Rajnath Singh also took the opportunity to laud the bravery and sacrifices of the Indian Armed Forces who have remained prepared and ready to fight the adversary along our borders, in counter-terrorism operations and in providing aid and support to fight COVID-19.

A Swachhata Warrior in Each of Us: #Sadhguru