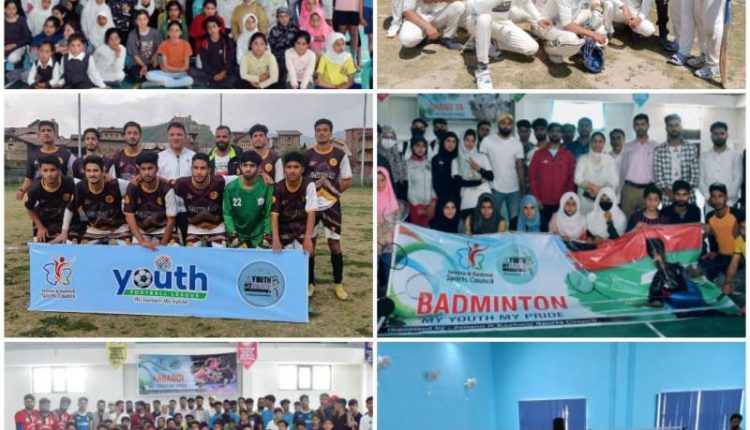 SRINAGAR : Moving from one border town to another, ‘My Youth My Pride’ initiative of Sports Council reaches to Rajouri and Shadipora, Bandipora in Kashmir division.

In Rajouri, a Badminton event was conducted in which a good number of players participated.

Javed Chowhan, Councilor was the Chief Guest and many other officials and spectators were also present in large numbers.

Meanwhile in the Kashmir division, events in the disciplines of Kabaddi, Badminton and Thang-Ta were held at Indoor Hall in Shadipora, Bandipora. More than 270 participants were part of the event.

Hilal Ahmad, Incharge TRC Synthetic Turf and many other officials from Sports Council were also present on the occasion.

While interacting with the athletes and others present at the venue, the chief guest said that, Sports Council is in the process of expanding its footprints across the J&K so as to bring more and more athletes under its fold. She also asked all present to take up games and sports for physical and mental well being.

To a query from one of the participants that whether My Youth My Pride shall be a yearly affair henceforth, she responded in affirmative. She also assured that more events in different games shall be held in Shadipora during the months to follow.

Yesterday’s match played between BSK Karshangama and MIE Akura went into the kitty of the latter. For winners, Rayees top scored with 53 runs and Waqar was among wicket takers grabbing 5 scalps, earning him man of the match in the process.

In today’s fixture, the first match of the day was played between Seer-XI and Sports Club Seer.

Seer XI after winning the toss decided to bat and set a target of 172 for the opponents. Shakir Zahoor was the top scorer, piling up 54 runs for the team. Aijaz and Aaqib also chipped in with cameos of 25 and 27 respectively.

In response Sports Club Seer failed to chase the target and fell short by 12 runs.

Shakir Zahoor for his performance was declared man of the match.

Another match of the fixture being played between Young Islamia Anzwola and Wonder Boys Seer was in progress when the report was filed.

Meanwhile, in the Youth Football League being played at Gani Memorial Stadium Srinagar, SCFA triumphed over Chanapora Football Academy by 2-0.

With this win SCFA became the third team to confirm their place in the final round of the League which shall commence from the next week.

Though Saahil and Feroz were the goal scorers, man of the match went to Sahil for exhibiting exceptional game skills besides scoring a goal.

Today, the last match of the qualifying round is slated between Sopore FA and SCFA Bandipora.

Rajouri hosts ‘My Youth My Pride’ event in Badminton; Taekwondo,…