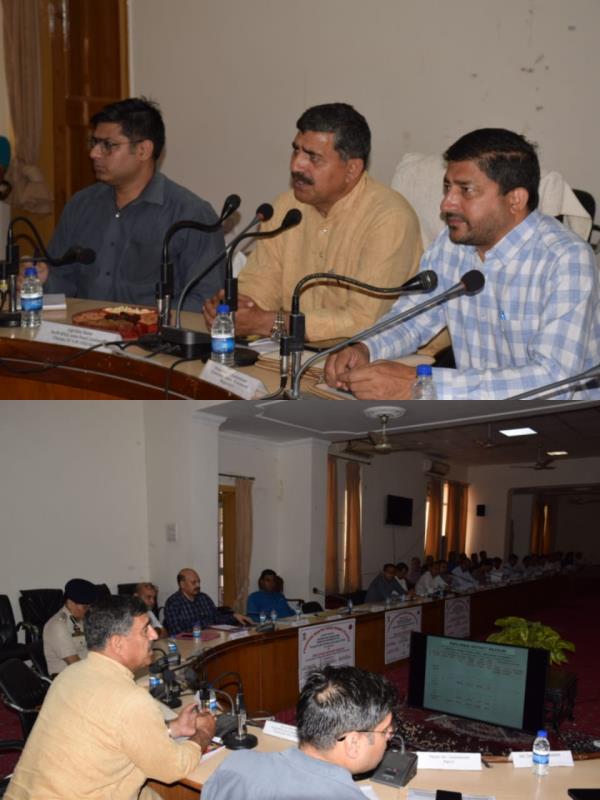 At the outset, the DDC Rajouri gave a powerpoint presentation on the achievements recorded under different schemes and the status of the developmental projects being executed in the district by different agencies.

Issues impeding the execution of the developmental works were also discussed threadbare during the meeting.

Taking stock of the progress under CRF, It was informed that out of 6 schemes sanction for the District 1 scheme is complete while the rest are at different phases of execution.

Seeking the progress of schemes under NABARD, the meeting was informed that against 84 schemes, work on 19 schemes was complete in all respects, while 34 schemes are in progress and the work on 31 schemes has not been started yet.

About the PMGSY roads, the meeting was apprised that out of 319 schemes under execution in Budhal and Rajouri subdivisions, 275 schemes have been completed and the work on 44 schemes was at different stages.

While assessing the Power Supply Scenario in the district, the MP took a detailed review of the implementation of centrally sponsored schemes including DDUGJY, PMDP (Rural), IPDS, PMDP (Urban) and others.

Regarding MGNREGA, it was apprised that as many as 18298 works were taken up in the financial year 2021-22 out of which 5819 have been completed, while job cards have been issued to 1.06 lakh locals.

Reviewing the status of houses being constructed under PMAY, the meeting was informed that against the target of 30661 houses, the work on 15968 was complete.

Seeking the progress under PMAY-U, the meeting was informed that the work on 318 houses out of 2155 is complete in all respects.

Discussing the functioning of the Self Help Groups, the concerned officer from NRLM informed that there are 3200 active self-help groups in the district involved in different income-generating activities including karyana, beauty parlour etc.

About the JJM, the meeting was apprised that as many as 293 projects have been approved under Jal Jeevan Mission at an estimated cost of Rs 1942.80 crore and the DPRs of all the projects stand prepared.

Similarly, the MP also reviewed the progress under other centrally sponsored schemes being implemented by different departments in the district.

Addressing the officers in the meeting, the MP asked them to be responsive and take comprehensive measures to minimise the difficulties of common people, work at grassroots level and reach out to the people to address their genuine concerns.

Stating that the interdepartmental coordination is a must for better results on ground, he asked the departments to work in tandem to remove the bottlenecks and impediments so that the project execution is not affected in any way.z

Directing the concerned departments to mobilize their men and machinery for effective implementation of all schemes and coverage of 100% eligible beneficiaries under all schemes, he asked them to ensure that no eligible beneficiary is left out from availing the benefits of the welfare schemes.

Saying that public role is inevitable in developmental process, he further directed the officers to remain in touch with the people, pay regular visits in all the remote and far-flung areas so that the people can avail maximum benefits of these schemes.

The MP also emphasized on optimum utilization of available resources and instructed the concerned officers for regular monitoring and follow up of all ongoing development works to achieve quality parameters.

Meanwhile, the MP also held a meeting with the PRIs who highlighted a number of issues and demands regarding augmentation of water and power supply, better health care facilities, upgradation of govt institutions, shortage of staff etc during the meeting for which the MP assured that appropriate measures would be taken to redress all the genuine concerns on a priority.