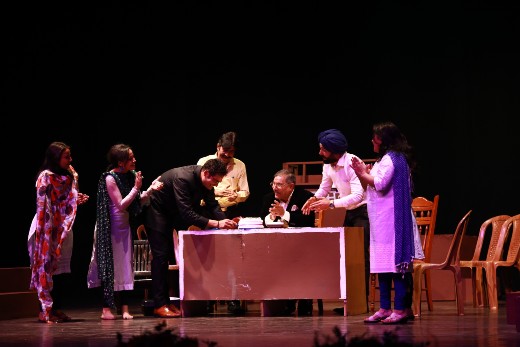 Rama Pandey brings ‘Giraftari’ to Delhi, a play based on adaptation of Franz Kafka’s popular novel ‘The Trial ‘

New Delhi: Delhi theatre enthusiasts are in for a treat as Shri Ram Centre for performing arts, Mandi house will open its door on 5th March for the play Giraftari. Rama Theatre Natya Vidya (RATNAV) in collaboration with The Austrian Embassy, The Austrian Cultural Forum, The Embassy of the Czech Republic and supported by Sideways Consulting (A creative Problem Solving outfit) will bring the play Giraftari based on Franz Kafka’s popular novel “The Trial” to Delhi post Covid19 following government guidelines.

The debut production of RATNAV, ‘Giraftari’ will return post-pandemic following social distancing norm and spaced seating. The theatre has been sanitized and every audience member will be given a complimentary mask. Media veteran and founder of RATNAV, Rama Pandey, is also the director of the play. Rama Theatre Natya Vidya (RATNAV) plans to kick start the theatre space which has been shut for the past few months.

Giraftari is an adaptation of Franz Kafka’s popular novel “The Trial”. Set in contemporary Delhi, it is the story of a common Indian man, who has been alienated by society. The director has used a fusion of the dying Indian oral and folk forms in the play. Art forms ranging from keerat from Rajasthan; Tasha Dhol and Nafiri instruments from the streets of Purani Delhi, find a place in the play.

Director of the play and founder of RATNAV, Rama Pandey said, “After many successful shows, its once again returning to the stage on 5th March 2021 at the Shri Ram Theatre of Arts. It is a collaboration between the Austrian Embassy, The Embassy of The Czech Republic, Rama Theatre Natya Vidya Group, and Sideways Creative Consultancy. Both countries have been brought together by their love and deep historical connection with Kafka’s Life and Legacy. This Hindi play will also have a unique online showcase. A treat for lovers of both Hindi literature and Kafka’s work. This endeavor also brings together the international literary works and the diverse folk arts and artists of India. Later on, RATNAV aims to showcase the play in Austria and The Czech Republic as well.“

Commenting on the collaboration, Matthias Radosztics, Minister Plenipotentiary said, “Austrian Cultural Forum is delighted to partner on a Franz Kafka play which is first Hindi adaptation of the original. Although, the play was published a few years ago but keeping in mind the pandemic situation the play is suitable for all. Its primary objective is that it should reach to the common man which has been justified by the adaptation of Rama Pandey.”

Lending support to the initiative, Abhijit Avasthi, Founder – Sideways said “It’s our privilege to partner with the Consulate of Austria and Ratnav in the staging of this timeless and important classic. Especially so in a time when all of us are finding it hard to make sense of what’s going on around us. We are certain that Rama Ji’s adaptation with nuanced local sensibilities will leave a deep positive impact on the audience.”

About Director: Rama Pandey is the founder of Rama Theatre Natya Vidya (RATNAV) and Montage Films. Born and brought up in Jaipur, she started her career as a child artiste. She has played the role of the lead actress in many popular plays like Shatranj Ke Mohre, Ashar Ka Ek Din, Bhumija, Kanchanrang, Jasma Odan, and Shuturmurg, etc. Apart from Doordarshan and Aakashwani she was associated and worked with BBC Hindi, Voice Of America, CBC Canada and Radio Netherland TV Centre Holland. She has written, produced, and directed many documentaries, telefilms, and TV shows for Doordarshan and various Central and State ministries, PSUs, universities, and other organizations. She has written books on women and children. “Begum Bano Aur Khatoon”, “Faisle” and “Suno Kahani” are her popular books. She has won many national and international awards for her contribution in the field of theatre and television.