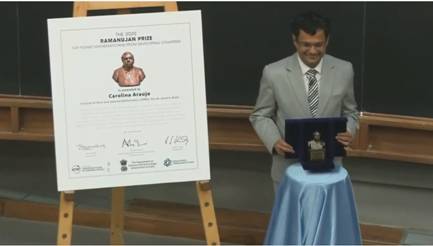 New Delhi: The Ramanujan Prize for Young Mathematicians 2020 was awarded to Dr. Carolina Araujo, Mathematician from the Institute for Pure and Applied Mathematics (IMPA), Rio de Janeiro, Brazil, in a virtual ceremony on 9th December 2020.

The prize awarded annually to a researcher from a developing country funded by the Department of Science and Technology of the Government of India in collaboration with ICTP (International Centre for Theoretical Physics), and the International Mathematical Union was given for her outstanding work in algebraic geometry. Her work area focuses on birational geometry, which aims to classify and describe the structure of algebraic varieties.

Dr. Araujo, who is Vice President of the Committee for Women in Mathematics at the International Mathematical Union, is the first non-Indian to receive this prize and will be a role model for all women.

Informing her about new programmes for women like Vigyan Jyoti, initiated by the Department of Science and Technology (DST), Prof Ashutosh Sharma, Secretary, DST invited Dr Araujo to India to encourage women mathematicians and inspire them by her own example.

Prof. Carlos Kenig, President of the International Mathematical Union (IMU), congratulated her and praised her role in promoting women in mathematics and in organising important mathematical activities. “She has been a Simons Associate with ICTP since 2015,” he added.

Ambassador/Permanent Representative of India to UNESCO, Mr. Vishal V. Sharma said that a mathematician does not belong to a particular country. Dr Araujo may be a Brazilian, but she’s a mathematician. She belongs to the universe because mathematics is the language of the universe.

At the award ceremony, Dr Araujo spoke about algebraic geometry, including birational geometry and foliations in a talk titled ‘Algebraic Varieties with Positive Tangent Bundles’.

The Prize, given every year to young mathematicians less than 45 years of age who have conducted outstanding research in a developing country, has been instituted by DST in the memory of Srinivasa Ramanujan, a genius in pure mathematics who was essentially self-taught and made spectacular contributions to elliptic functions, continued fractions, infinite series, and analytical theory of numbers.