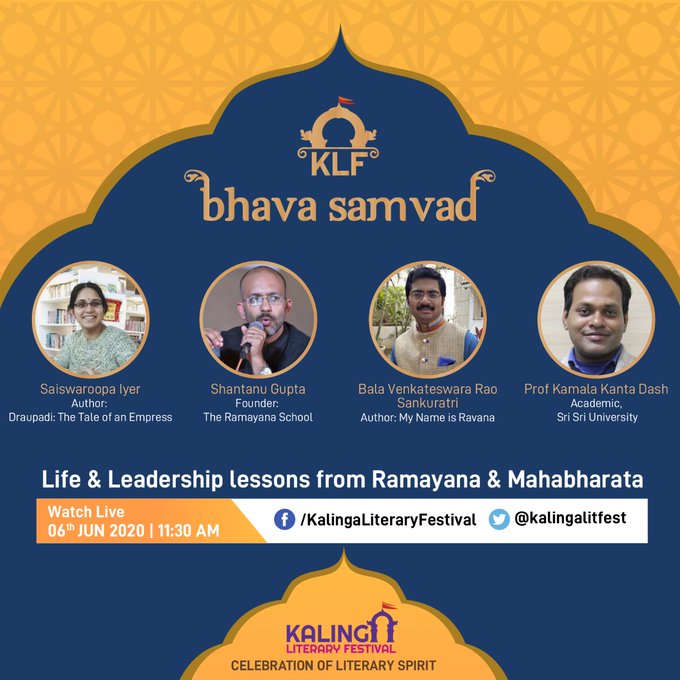 #Ramayana and #Mahabharata are more relevant than ever before, authors argue in KLF Bhava Samvad

New Delhi: In a specially convened webinar by Kalinga Literary Festival to its Bhava Samvad platform, young authors working on Ramayana and Mahabharata asserted that both epics have hundreds of lessons for life and leadership in the 21st century.
Founder of ‘Ramayana School’ Shantanu Gupta, author of ‘Draupadi’ Saiswaropa Iyer and the author of ‘My Name is Ravana’ Bala Venkateswara Rao were invited to share their journey. They shared their unique paths to the ancient texts and how they dived deep to unearth unique facets so far untold or less told in the public sphere.

As Shantanu puts it, the plot of Ramayana is engrossing readers over the period. Where Rama’s virtues remain intact during drastic conditions,
the courage of Sita asking Ravana to seek forgiveness to Rama should be seen as an epitome of bravery. Basically Ramayana, as an epic, is ageless and has got so much for the current generation. Bala V. Rao Sankuratri further adds that Ravana’s character is shown as the last limit of negativity. The visual presentation of epics on television are diluted with drama. People need to read Ramayana in order to know the roots. Similarly, Saiswaroopa says that women like Draupadi and Shakuntala have been given key importance in Mahabharata. Taking headon with the kuru mahasabha shows the audacity and attitude of Draupadi. Difference between a classic feminist and Draupadi who is the heroine can be seen widely.
Kamala Kanta Dash from Kalinga Literary Festival team well moderated the session and engaged the authors on the leadership insights from their chosen characters from Hindu epics- Rama, Ravana, and Draupadi.