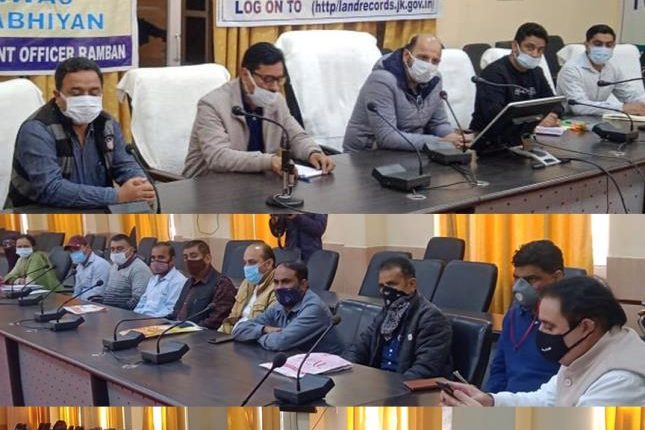 Speaking on the occasion, the Deputy Commissioner said that IEC campaign on ‘Aapki Zameen Aapki Nigrani’ has been integrated with weekly Block Diwas program to connect more and more people with this IEC campaign. He added that the demonstration teams will hold awareness activities at Panchayat level on every Wednesday and Saturday till December 31.

The DC said that the similar porgrammes are being conducted at identified locations in all the tehsils of Sub- Division Gool, Banihal, Ramsu and district headquarter Ramban by the Revenue Department in coordination with RDD and PRIs.

While highlighting the various features of DILRMP including ‘Aaapki Zameen Aapki Nigrani’, SVAMITVA and Unique Land Parcel Identification Number (ULPIN) scheme , the ACR informed the participants that public users can search and view copies of Scanned land record (data) online on CIS Portal- http://landrecords.jk.gov.in/. The initiative will facilitate easy online access to the Land Records System, thereby reducing manipulation of the Land Records and improving the efficiency of Revenue offices substantially, he added.

Similar programs were held in Sub divisions, Tehsil, where SDMs, Tehsildars, Naib-Tehsildars revealed that this programme aims to modernize management of land records, enhance transparency in the land records maintenance system and reduce the chances of land/property disputes, and facilitate conclusive titles to immovable properties, besides provide them easy access to authentic land records.

Meanwhile, during Block Diwas meeting, the ACD gave a brief report about tendering process being conducting by the RDD and other departments to execute all the developmental projects approved under Area Development Fund of DDC, BDC and Panchayats.

The DC advised the PRIs to work in an organized manner to run their village level administration effectively and improve service delivery and execution of developmental works in their respective Panchyats.

Earlier, PRIs and others present in the Block Diwas meeting highlighted public issues and demanded opening of AWAS PLUS portal to cover left out beneficiaries and sought basic amenities in their respective areas.

The DC directed the concerned officers to resolve their genuine issues on priority basis.