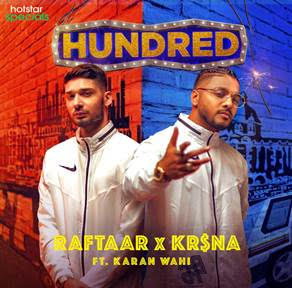 दो खिलाडी. प्रॉब्लम भारी. Hotstar Specials latest show HUNDRED – a masala entertainer about the many misadventures of a dysfunctional duo; starring Lara Dutta, Rinku Rajguru and Karan Wahi was a runaway success. Rap sensations Raftaar and Krsna have come together to launch a new rap song ‘Chaukanna’ featuring Karan Wahi and is inspired by the leading women of the show. Just like the uncanny jodi from the show, Raftaar and Krsna perfectly personify ‘दो खिलाडी. प्रॉब्लम भारी’

Chaukanna is a peppy number that perfectly navigates between the 2 contrasting personalities of Saumya (Lara Dutta) narrated by Raftaar and Netra (Rinku Rajguru) rapped by Krsna who bring alive the perspective of character Mad-E (Karan Wahi) from the show. Raftaar and Krsna have collectively brought to life the chaos and madness related with each of the characters and created this foot-tapping masterpiece.

Amazon successfully wraps up its first Career Day in India;…

Rapper Raftaar said, “The inspiration for this song came from the dysfunctional jodi of HUNDRED; Lara and Rinku are so uncanny but yet amazing together. So, when a chance to create something hatke popped up, we got pretty pumped. Chaukanna is a peppy number with an effortless hummable tune. We hope it briings some sunshine in these gloomy times. Working with Krsna and Karan was effortless, and I can’t believe we managed to pull this off virtually.”

Krsna said, “A crazy tune like Chaukanna beautifully compliments the chaos of the mad-jodi of HUNDRED. Raftaar and I both wanted to champion a character from the show and create a song that everyone would enjoy. When people listen to this song, we want them to get into the vibe of the song and dance their hearts out – that’s where the real fun lies!”

Hotstar Specials presents HUNDRED is about a terminally ill girl, Netra Patil (Rinku Rajguru) looking for thrills is hired to be an undercover agent by an ambitious female cop, ACP Saumya Shukla (Lara Dutta) looking for a promotion. As they both unite to accomplish their own goal in 100 days, chaos ensues. Directors Ruchi Narain, Ashutosh Shah and Taher Shabbir have maintained a crisp balance between action, drama and humour that make HUNDRED a fun family entertainer. The cast includes power house talent in prominent roles including Karan Wahi, Sudhanshu Pandey, Parmeet Sethi, Rohini Hattangidi, Arun Nalawde and Makarand Deshpande. The 8-episode series is streaming live on Disney+ Hotstar VIP.

Amazon successfully wraps up its first Career Day in India; more than 400,000 people…