A rapid COVID-19 test developed at Oxford University is now being used at Heathrow and being trialled at Hong Kong International Airport to screen passengers. The spinout company, Oxsed, was last month acquired by DNAFit Life Sciences, a wholly owned entity of Hong Kong-based genetics and diagnostic health testing company Prenetics. Deploying the test to further global airports is now under discussion. 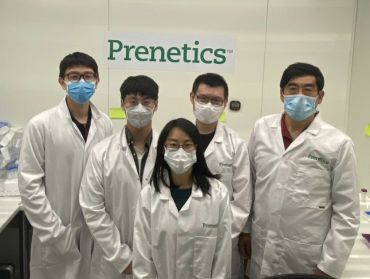 Funds received through the acquisition, and access to Prenetics global network of resources, will greatly accelerate Oxsed’s ambition to provide rapid COVID-19 testing globally, prioritising low- and middle- income countries. A rapid, accurate and affordable point of care test deployed globally could herald a significant development in reducing the spread of the virus between countries.

The UK’s first pre-departure airport rapid testing facility at Heathrow was set up by Collinson and Swissport and became operational earlier this month. The facilities, located in Terminals 2 and 5, will initially offer passengers travelling to Hong Kong and Italy the option to fulfil those countries’ pre-departure testing requirements at the airport.

The rapid nucleic acid RT-LAMP test is based on the work of Professors Zhanfeng Cui and Wei Huang, who led a team of researchers from the University of Oxford’s Department of Engineering Science and Oxford Suzhou Centre for Advanced Research (OSCAR).

The test produces results within 15-30 minutes, with positive results typically identified sooner. It detects SARS-CoV-19 with great sensitivity and specificity, with validated trials demonstrating a 96% positive agreement with 100% specificity. The technology was commercialised through a social venture spinout, Oxsed Limited. The test, under the name Oxsed RaViD Direct, has already received regulatory approvals with MHRA in the UK (FDA Equivalent) and the CE Mark in the EU, with further global regulatory approvals in process.

The rapid test is ideal for settings like airports as it can provide results within 30 minutes and could also be adapted for use in community care, hospitals, schools and large-scale events. UK travellers can pre-book an online appointment to take the test in purpose-built facilities at Heathrow, during which a nasal swab is taken for testing. The test is then performed using a RT-LAMP based method developed by Oxford University and taken for immediate processing by Prenetics.

Professor Wei Huang, from Oxford University’s Department of Engineering Science and co-founder of Oxsed, said: ‘Our inspiration to develop this rapid test was conceived at Heathrow Airport when our team returned from OSCAR at the start of the pandemic in January of this year. We felt that rapid testing should be a must for airport screening and our entire team has been working day and night to make this development happen. I am now very pleased to see our tests are actually used at Heathrow and making an impact on safe travel.’

Professor Zhanfeng Cui, from Oxford University’s Department of Engineering Science, Director of OSCAR, and co-founder of Oxsed, said: ‘After months of intense work alongside Prenetics, they are undoubtedly the perfect partner to quickly roll out our rapid test at scale, and help society resume to a more normal way of living and productivity. I am very excited that Oxsed can provide a very well-validated technology to the world.’

Avi Lasarow, CEO of Prenetics EMEA, said: ‘The Oxsed team has been incredible to work with and it is no doubt a game-changer when it comes to rapid testing. We are immensely proud to see it go live in Heathrow and are looking forward to announcing new initiatives where we are using Oxsed to fight the pandemic.’

New research confirms obesity is a cause of kidney disease