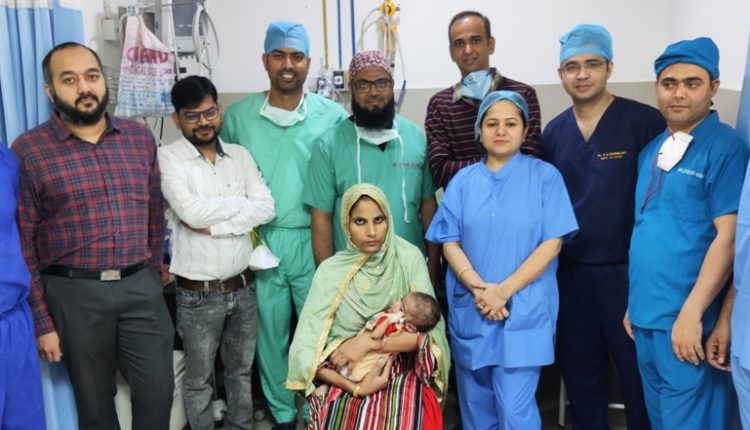 Aligarh : Hathras residents, Vakil and his wife’s infant son had odds stacked against him well before he was born. The neonate came into this world with a hole in heart and a congenital condition known as Transposition of the Greater Arteries (TGA)—in which the arteries that carry blood out of the heart are reversed or transposed.

Their distress stretched for a longer time due to the exorbitant fees at the private hospitals and no end in sight to mammoth waiting lists at Government facilities where they hoped for affordable adequate health care. Adding to the worse, at this instant, the newborn’s skin started turning blue with troubled breathing.

The couple’s despairing search finally ceased at the Jawaharlal Nehru Medical College (JNMC), Aligarh Muslim University (AMU), where a free-of-cost, rare surgery under the Rastriya Bal Swasthya Karyakram (RBSK) scheme of the Government performed by a team of Cardiothoracic Surgeons provided the infant with a new lease on life.

Prof Mohd Azam Haseen (Chairperson, Department of Cardiothoracic Surgery) who performed the surgery with colleagues, Dr Mayank Yadav and Dr Syed Shamayal Rabbani said, “We have successfully repaired the inverted great vessels and closed the hole in his heart. The infant is recovering well and will soon be discharged”.

“The child was referred for the necessary intervention by Paediatric cardiologists, Dr Shaad Abqari and Dr Moaz Kidwai. We evaluated the patient and immediately admitted him for surgery”, he added.

Dr Shaad Abqari said that the kid had a very complex defect and only a handful of government centres have the capability of doing this surgery.

“It was a very challenging procedure and the fact that the baby weighed only 2.8 kg made the post-operative care even more difficult,” said Dr Mayank Yadav adding that a team of Clinical Perfusionist, Dr Sabir Ali Khan and Irshad Sheikh managed the body functions of the kid as his heart and lungs were stopped for 110 minutes during the surgery— Dr Dipti Channa provided the patient with the anaesthesia.

Dr Shamayal Rabbani pointed out that JNMC has joined the list of very few top notch hospitals, where these surgeries are successfully performed.

Congratulating the team of surgeons, AMU Vice Chancellor, Prof Tariq Mansoor said that over 500 cardiac surgeries have been done at JNMC in the past few years.

Prof Rakesh Bhargava (Dean, Faculty of Medicine) and Prof Shahid Ali Siddiqui (JNMC Principal) said that patients from all across Uttar Pradesh and other parts of the country prefer JNMC for its advanced medical infrastructure, better communication, and easy access for follow-up visits.