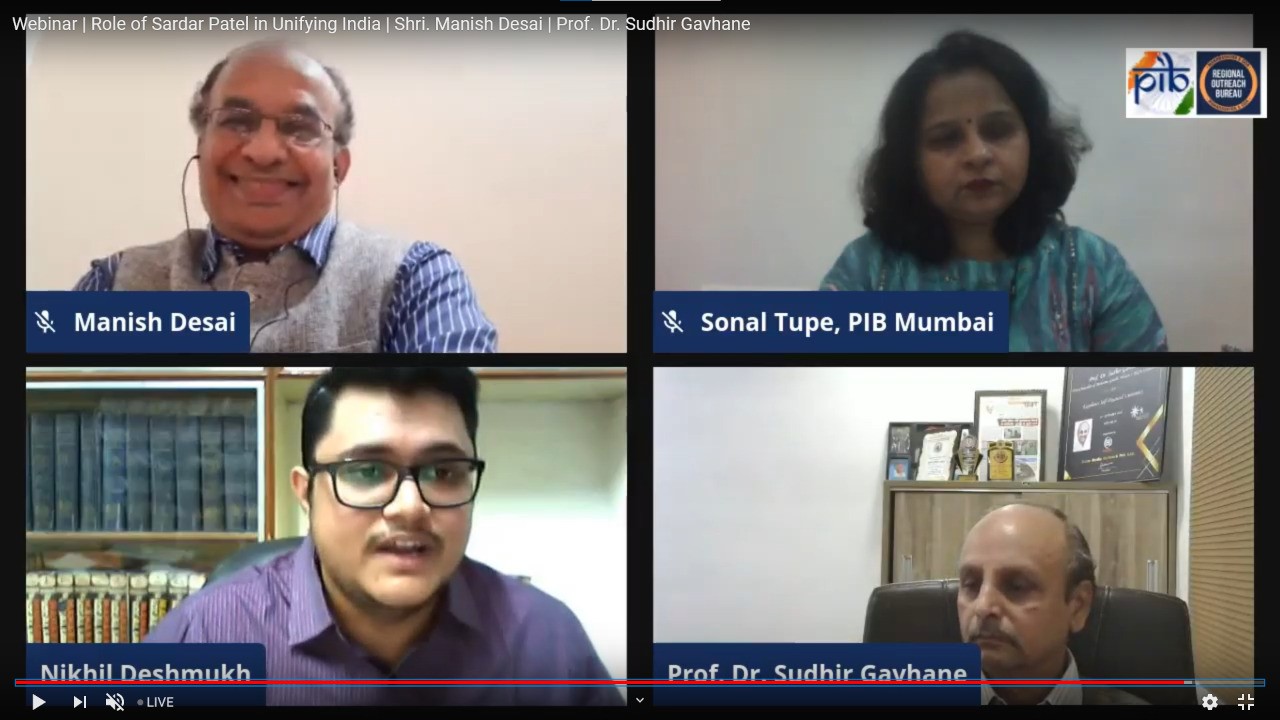 ‘Rashtriya Ekta Diwas’ is a fitting tribute to the leader with legacy of selfless service for the nation – Prof. Sudhir Gavhane

Mumbai: ‘Rashtriya Ekta Diwas’ is being observed on the Birth Anniversary of Sardar Vallabhbhai Patel, across the country today, on 31st October. On this occasion, O/o Press Information Bureau and Regional Outreach Bureau held webinar on “Role of Sardar Patel in unifying India” while celebrating National Unity Day through digital mode.

The webinar began with the song on Unity, composed by the Song & Drama Division of the Information & broadcasting Ministry and was followed by administration of ‘The Unity Pledge’ before the address by the speakers of the webinar.

Prof. Sudhir Gavhane, Vice-Chancellor of MGM University, Aurangabad elaborated about capabilities, qualities and nature of leadership of Sardar Patel. He said that Sardar Patel, one of the best disciples of Mahatma Gandhi, was a grass-root leader and a great organiser, who understood thoughts and pulse of the masses. Prof Gavhane also spoke about the leadership role played by Sardar Patel in unifying India after independence without resorting to unnecessary use of force. Prof. Gavhane calling the Lohpurush as ‘Political Sanyasi’ narrated that, it is the legacy of his selfless service for the nation and the leadership quality to see through power as tool to serve the nation, which has set an example for us to follow for nation-building. It was observed that the foresight, tact and resolve, Sardar Vallabhbhai Patel demonstrated in integrating more than 500 princely states is an unparalleled accomplishment in Indian history.

Speaking about contemporary relevance of Sardar Patel’s Economic Vision, Manish Desai, Director General, West Zone, PIB, cited the example when our neighbour refused to honour business agreements and supply jute in the post independence period, it was Sardar Patel who asserted – “If they cannot guarantee to implement agreements, let us grow the jute and cotton and food grains we need.” “These were the early foundations of AatmaNirbharBharat” he added. Self-reliance was among the chief tenets of Sardar Patel’s economic philosophy and Economics was an intensely practical science for him. Patel wanted Indian economy built on surer foundations of increased industrial and agricultural production and increased wealth. Decades after his death, Sardar Patel continues to inspire all those who are engaged in building a resurgent ‘New India’, he added.

Dr Rahul Tidke, Dy. Director gave introduction to today’s subject, its purpose & relevance while sharing activities undertaken under this initiative today. Nikhil Deshmukh, Asst. Director, Regional Outreach Bureau gave vote of thanks to all speakers and stakeholders for making the webinar productive and engaging one. Sonal Tupe, from PIB Mumbai anchored the show.