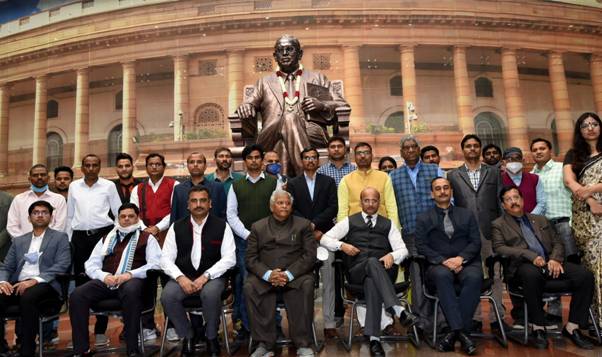 During his address at Orientation Programme of Post Doctoral Fellows of DAIC in New Delhi today, the Minister of State for Social Justice and Empowerment Shri Rattan LalKataria urged newly inducted post doctoral fellows of Dr. Ambedkar International Centre (DAIC)to utilise this opportunity in true earnest and contribute to country’s progress by joining government in its vision of ‘SabkaSaathSabkaVikaas’.

“During these two years, you should understand the current social and economic issues of the country, research upon them and suggest ways for the country to fight them effectively,” said Mr Kataria.

Mr. Kataria further said that Government has made special efforts in last five years on research due to which some of the prestigious universities of the country have started establishing their knowledge in the world.He also expressed confidence that,under the vision of Prime Minister, DAIC will also soon join the league of prestigious national and international institutions.

Dr. Ambedkar International Centre (DAIC) was inaugurated by the Prime Minister on 7th December, 2017 to serve as an important place for research on social and economic issues. The Centre has been envisaged to act as a government think-tank engaged in preparing policy briefs and undertaking projects, research and field work. Aimed at fulfilling this vision, the Ministry of Social Justice and Empowerment has been working endlessly towards developing this Centre and building an ethos of research and original thinking. It is towards this purpose that an extensive library with a rich digital repository has been housed at this Centre.

Effective Study Online In 2021: What Things You Should Do?