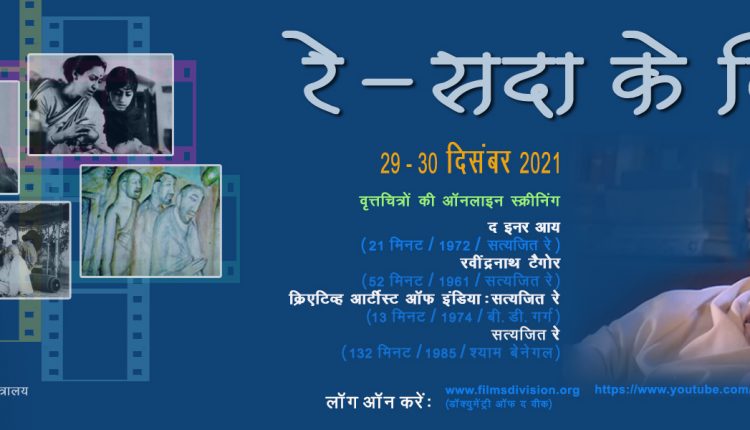 New Delhi: Satyajit Ray, one of the greatest film makers of all the time, is credited with taking Indian cinema to the global level. Continuing with the year-long birth centenary celebrations of the auteur, Films Division is presenting an online film festival, RayForever, a curated package of non-feature works by Ray along-with films on him and his oeuvre, produced by Films Division. The festival will be showcased on Films Division Website on 29th & 30th December, 2021.

RayForever festival includes a rare documentary made by him on Nobel laureate, Rabindranath Tagore, and the much acclaimed eponymous biopic on him by Shyam Benegal. The films scheduled in the festival are:

Rabindranath Tagore (Satyajit Ray/Films Division/54 Mins/1961) – the documentary shows the life of the greatest Bengali talent of all time, Rabindranath Tagore. It highlights the contribution of Tagore, his work in Bengali literature, poetry and painting along with formation of Visva-Bharati University.

The Inner Eye (Satyajit Ray/ Films Division /20 Mins/ 1972) – a film on the life and works of Benode Behari Mukherjee, one of the pioneers of modern Indian art who took up murals as a mode of artistic expression while remaining as a key figure in contextual modernism.

Creative Artists of India : Satyajit Ray (B.D. Garga/Films Division/14 Mins/1974) – one of the early documentaries on Satyajit Ray where the filmmaker narrates the process of his film making.

Satyajit Ray (Shyam Benegal/Films Division/132 Mins/1985) – over the course of two years, well-known film maker Shyam Benegal interviewed Satyajit Ray about his career and his vision behind filmmaking, resulting in the well-researched biopic on the legend.

To experience the opus of Ray, the Poet of Indian Cinema, join Films Division by logging on to https://filmsdivision.org/Documentary of the Week and by spreading the word among cineastes.