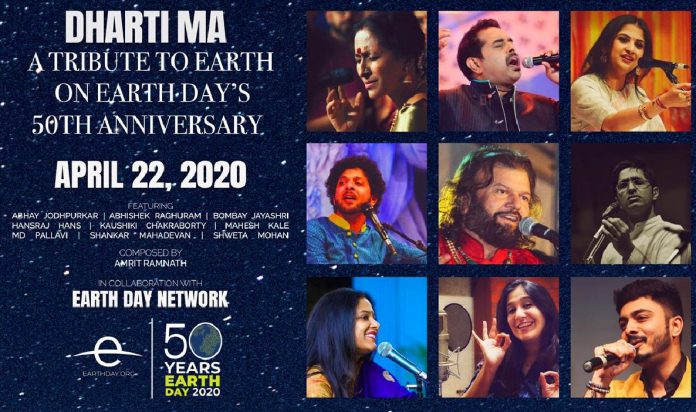 New Delhi: One of the largest and most awarded private radio networks in India, 93.5 RED FM has exclusively launched Earth Day Network’s song ‘Dharti Ma – A Tribute to Earth’ to commemorate Earth Day’s 50th anniversary. This initiative comes at a time when the world is in the middle of a global health crisis and there is panic everywhere. The song will be aired across the RED FM network and social media pages on 22 April 2020, to spread positivity.

The song ‘Dharti – Ma’ has been rendered in eight languages presenting an amalgamation of styles. Composed by Amrit Ramnath, the song has been sung by leading vocalists and musicians of India – Bombay Jayashri, Kaushiki Chakraborty, Hansraj Hans, Shankar Mahadevan, Mahesh Kale, Abhishek Raghuram, Shweta Mohan, MD Pallavi and Abhay Jodhpurkar. As the song features these artists on various instruments, the composition is universal in its appeal to unite the nation through the power of music.

Speaking on the occasion, Ms. Nisha Narayanan, Director and COO, RED FM and Magic FM, said, “The outbreak of COVID-19 has indeed impacted our planet severely. We wanted to celebrate Earth Day’s 50th anniversary by spreading awareness about the alarming need to look after our planet. We decided to support Earth Day Network’s song ‘Dharti – Ma’ that is a tribute to Earth. Our vision was to once again bind everyone together with the eternal power of music amidst the lockdown. We are proud to launch this multi-lingual song across our network, which has always believed in promoting language agnostic music. We are hoping for maximum participation in this celebration of togetherness, unity and hope through a special song that beautifully encapsulates Incredible India.”