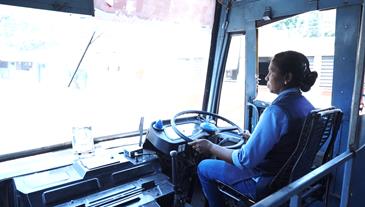 redBus salutes the spirit of women behind the wheels; releases a special video for International Women’s Day

Bengaluru: redBus India’s largest online bus ticketing platform, has released a 2-minute video, depicting the spirit and enthusiasm of women bus drivers and conductors, across India, on account of International Women’s Day. redBus spoke to women drivers and conductors from various states across India and captured the narration of their life experiences on camera in order to showcase their journey to the nation and inspire thousands of other women to take a bold step towards achieving their dreams and goals in life.

While bus driving is primarily a male-dominated occupation, there are a number of women, who are breaking stereotypes and manoeuvring their way through the busy streets and highways of India. They have even led from the front during the course of the pandemic and have safely transported thousands of people within and across cities.

As the market leader in the online bus ticketing space and as a brand that champions gender equality, redBus decided to celebrate women bus drivers and conductors, by offering them a platform to share their views and experiences. In addition, the theme of this year’s International Women’s Day, #ChooseToChallenge, seemed a perfect fit for the organization’s efforts to celebrate the Sheroes, who are challenging archaic beliefs and stereotyping of women.

Ms. Vasanthakumari, Asia’s first women bus driver, who worked with TNSTC and retired in 2017 after decades of service, said, “Irrespective of the profession, women should always put their foot forward, understand the basics of the industry. Even if someone discourages us, we should be fearless to succeed“

Eko hires industry experts for Head of Lending and Head of…

Link to the video: https://fb.watch/45VDHnQtxK/

What other women drivers and conductors had to say?

Ms. M Priyadarshini, who works with APSRTC, said “There is no men and women classification in my department. Everyone is treated as equal”
Ms. Sheela, who works with KSRTC (Kerala), said ”I have always been passionate about driving. I really love it and I am grateful to be doing this as a profession.”

Speaking on the video tribute to women drivers and conductors, Pallavi Chopra, VP-Brand & Head, Marketing, at RedBus, said, “As a woman, I am extremely proud to have redBus present an account of the astonishing achievements of women in the bus transport sector. We salute the attitude and resolve of women, who have not only challenged societal norms, but their own capabilities and have stood distinguished. The objective of honouring them with a video, is to recognise their achievement and encourage thousands like them to take up and excel at so-called traditional male jobs or occupations. On behalf of the redBus team, I’d like to wish women in India on the occasion of International Women’s Day and also thank the Regional Transport Corporations for allowing us to talk to their employees.”

Amway India launches #AmYoung; An initiative to promote entrepreneurship among…