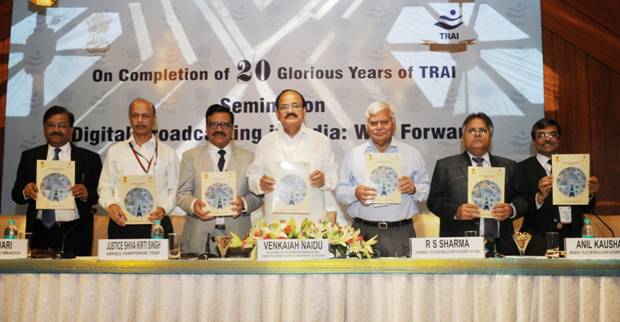 Reforms brought out by the Government aimed at transforming lives of people: – Venkaiah Naidu

New Delhi: Minister for Information & Broadcasting, Shri M Venkaiah Naidu has said the Government’s initiatives like Make in India, Skill India and Digital India campaigns were clearly positive signals for new transformation including GST which would prove to be a game changer for Indian Media and Entertainment sector, especially the Broadcasting sector. The Minister stated this while inaugurating the Two Day seminar organized by Telecom Authority of India on the occasion of completing two decades here today.

Elaborating further, Shri Naidu mentioned that the broadcasting sector in the country was at the threshold of entering into new era of digital broadcasting, which would open lots of opportunities to use latest technological innovations to not only enhance reach but also enhance the quality of the reach. The revival of radio, the digitisation of cable and the free to air DTH audience growth point to the latent demand for broadcasting in the Indian market at a time when broadcasting in advanced markets in the west is losing out significant space to digital on-demand media platforms. The push towards Digital Terrestrial Television (DTT) thus comes at a critical juncture as Doordarshan, the public broadcaster in India looks to expand its DTT footprint from the current 16 cities to another 44. The Minister acknowledged and appreciated TRAI’s recent recommendation on time bound implementation of DTT in India.
The Minister stated that the government was committed to provide an enabling environment through various policies for the further growth of the Media and Entertainment sector. The Digital India campaign along with the Make in India campaign would strengthen the industries such as video streaming, online music services and gaming in India taking advantage of the increased internet penetration. The Minister also mentioned that indigenous manufacturing of various digital broadcasting equipment had taken roots under the initiative of Make in India and that. He urged all the stake holders to encourage and promote indigenous development of equipments in the country.

Shri Naidu stated that the gap between the premium Direct To Home (DTH) market and the low quality cable market, lay an opportunity that was currently being tapped by the free to air (FTA) DTH platforms like Doordarshan’s FreeDish. With transparent online auctions allowing for market based discovery of the value of these free to air channels, there was an audience revolution of sorts with rural audiences getting on the FTA DTH bandwagon and contributing for enhanced number of entertainment channels.

Speaking on the role of the Telecom Regulatory Authority of India, the Minister said that the transition to Digital Broadcasting had posed several challenges and the role of TRAI was extremely crucial in this regard for overcoming any hurdles that may put the transition to newer technologies on a slow path. Shri Naidu congratulated TRAI for completing two decades of regulatory services to the nation, which had contributed immensely to the growth of Telecom and Broadcasting sectors while keeping consumer protection in mind.