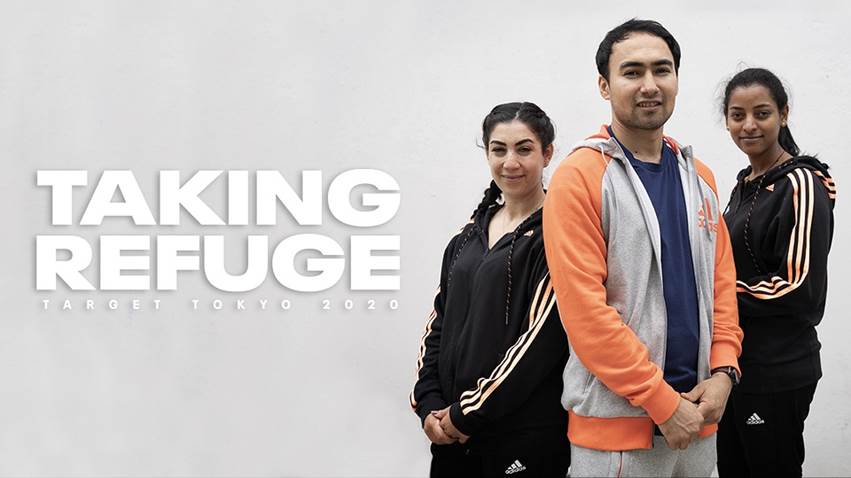 Inspired to make the world a better place through sport, Olympic champion Niccolo Campriani leads three refugees on a brave journey to qualify for the Olympic Games Tokyo 2020 in his own event, 10 metre air rifle shooting, documented in the new series Taking Refuge. Using mental and physical skills honed over years as a professional athlete, Campriani coaches and mentors Mahdi, Khaoula and Luna on a journey of learning, rediscovery and finding inner peace through the unifying power of sport.

At Rio 2016, the Olympic Games welcomed its first refugee team, a collection of athletes displaced and seeking sanctuary due to matters beyond sport who could be defined by their actions on the playing field. This small refugee team inspired three-time Olympic gold medallist Campriani to take the torch and lead the next generation of refugee athletes. Taking Refuge follows Niccolo and his team of athletes as they set out to achieve their Olympic dream.

“Sport is made of stories, not medals. Some of them are legendary, some are drama, and some others don’t have the happy ending that one would expect,” said Campriani. “Taking Refuge is a story of hope, a story that combines the sport challenge of qualifying for the Olympic Games in less than 1,000 days with the inspirational determination of a group of refugees.”

For more than a year, Campriani has invested his own free time and resources to help these individuals and bring the project to fruition. Relying heavily on his personal network, the shooting community and former sponsors, several have supported his effort by donating the needed equipment including air rifles, uniforms and electronic targets. Together with his former rival and five-time Olympian and Beijing 2008 shooting gold medallist from India Abhinav Bindra, the two athletes have been inspired to create the “Make A Mark” project out of the overwhelming positive response to the initial project documented in Taking Refuge.

“The story of Mahdi, Khaoula and Luna is a resounding proclamation to the world that sport has the power to bring about change,” said Bindra. “As their documentary Taking Refuge launches, Nicco and I are already thinking ahead with the launch of the project “Make A Mark” as an extension of the work we have put in. We aim to see more Olympic champions get involved and future mentors to take this legacy forward!”

In addition to support from within the shooting community, Campriani’s team has trained at the World Archery Excellence Centre in Lausanne, Switzerland and travelled to Northern Italy, Doha and Bangalore, India on their journey to qualify.

Produced exclusively for the Olympic Channel by Vice Media, Taking Refuge is currently on hiatus until 2021 due to the COVID-19 pandemic.

Offering year-round coverage of Olympic sports and elite athletes in their quest for success, the International Olympic Committee’s (IOC) Olympic Channel over-the-top (OTT) streaming service is available worldwide and subscription-free at olympicchannel.com, its mobile apps and on connected TV devices.

Three-time Olympic shooting gold medallist Niccolo Campriani brings together a group of refugees in Lausanne, Switzerland for a day of try-outs. His aim: to select three of them who will train and try to qualify for the next Olympic Games.

Nicco provides an update on his students’ performances. Mahdi and Khaoula talk about life in Switzerland and why this opportunity to train with Nicco means so much to them. Nicco is already planning ahead to the first competition but Mahdi has an issue with getting a passport.

The team travels to Italy for their first international competition, which is also Mahdi’s first trip outside of Switzerland since arriving in the country. On their way to Bologna, they train at Nicco’s first shooting range and meet his former coach and his parents. Will they manage to beat the minimum qualifying score for the Olympic Games?

Mahdi, Khaoula and Luna open up about their respective journeys of leaving their home countries behind and their hope for a better life. Mahdi is now an apprentice and Khaoula takes German classes. Luna’s selection on the team might be compromised by exciting news. With a special guest at practice, the team discusses their next international trip.

The team travels to India to train with some of the world’s top air rifle athletes and compete in a friendly match. They are welcomed by Abhinav Bindra, India’s first individual gold medallist in the history of the country. Are they able to remain calm under pressure? As they get ready for a decisive qualification round, there is turning point in the team’s journey – the Olympic Games Tokyo 2020 have been postponed due to the COVID-19 pandemic.

iednewsdesk Jun 18, 2021
The Delta variant of Covid-19 is associated with approximately double the risk of hospitalisation compared with…