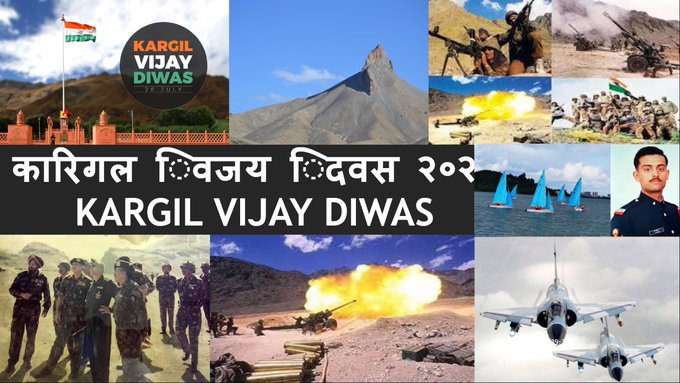 21 years ago, when the brave hearts of Indian Armed Forces were facing the enemies at the battlefield in Kargil, the entire nation was standing like a rock behind them. The battle was also being fought in the backstage by many other citizens. “In one of the famous photos of the Kargil War, we see that a supply truck was on fire. How can we forget the contribution of the truck driver?”, asked Colonel (Retd.) Amit R. Dalvi, while recalling the Kargil Battlefield. There were others like postmen, porters and many others who were equally involved in Operation Vijay. At that time, railways had to reschedule many regular trains to allow the troops to pass on priority basis. Then, the journalists and camerapersons also played an important role by informing the citizens about the developments from the battlefield. This led to an entire nation backing the brave hearts, which in turn, boosted their morale and added to their mental strength. “The Kargil conflict became a people’s war. The political leadership, the unity of our country and the co-ordination at various levels helped us”, said the retired army man. Col. Dalvi is the Director of Services Preparatory Institute in Aurangabad. He was speaking at a webinar on Kargil Vijay Diwas organized by Regional Outreach Bureau, Maharashtra and Goa, and Press Information Bureau (Western Region) on July 26, 2020. The presentation given by (Retd.) Col. Dalve can be accessed here.

Col. Dalvi narrated the history of events during the period. In the period after Asia’s nuclear flashpoint where both India and Pakistan conducted nuclear tests, the geopolitical situation of the region was such that Afghanistan was going through turbulence, in Pakistan the relation between then PM Nawaz Sharif and the armed forces was at a low point, and ending its wait and watch policy, China stood behind Pakistan. Speaking about the aftermath of Kargil, Col. Dalvi said, Pakistan had lost a lot.

The Director of Services Preparatory Institute also discussed the geography and terrain of the region, where the enemy was perched on top of a hill and the Indian soldiers who were at a disadvantageous position, had to climb up to capture the point. Further, it was fought in one of the toughest terrains; the battlefield was situated at 16,000 – 21,000 feet where oxygen level is very low. The Retired Colonel stated “In the period between June 13-17, 1999, the first decisive victory came for Indian Army when the team of Major Vivek Gupta and Captain Mridul Kumar Singh successfully captured Tololing (Pt. 4590). Then, in the final victory, Captain Shyamal Sinha, Havildar Joginder Singh, Rifleman Sewang Morup & Major Navdeep Cheema climbed a cliff. As they reached, there were 11 Pakistani soldiers. The 4 brave soldiers overcame them and unfurled the national flag at Point 5770 on June 28, 1999 at 600 hrs”.

Speaking on the importance of Kargil Vijay Diwas after 21 years and in the future, Col. Dalvi said, “True homage will be paid to the 527 brave heart martyrs only when we become worthy of being fought for. All our works, wishes and efforts should be directed towards being responsible citizens”. In this context, he also said that, we should be careful about the messages being shared in social media, where again, citizens should be careful of the nation’s interest and welfare of the country.

Dr. J.V. Pantpatil, Manager, Song and Drama Division (S&DD) in Regional Outreach Bureau narrated the history of Armed Services Entertainment Wing which was established in 1967 to bring the people living in the border areas into mainstream and to entertain the lonely soldiers.

The song ‘Sarzameen-E-Hind Par Fir Khauf Ka Saya Na Ho’ by S&DD Artist Shri Makarand Mesram was played on the occasion. The song was produced under the Sindhu Darshan Programme, as a tribute to the valour of the Kargil warriors.