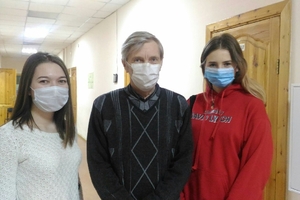 Regional stage of the All-Russian Olympiad for schoolchildren in geography

Schoolchildren from Petrozavodsk, Kondopoga and other cities and regions of Karelia took part in the Olympiad.
The regional stage of the All-Russian Geographical Olympiad took place in Petrozavodsk. In accordance with the Time Regulations for the regional stage of the All-Russian Olympiad for schoolchildren, this year it was held in a hybrid format, some schoolchildren wrote their work in full-time format, children from remote regions – in a remote format.

The jury consisted of teachers of the Department of Earth Sciences and Geotechnologies of the Institute of Forest, Mining and Construction Sciences of PetrSU: senior teacher T.V. Vaga, N.B. Polevshchikova and I.V. Shchekoldina, associate professors of the department, candidates of geographical sciences. The chairman of the jury was Doctor of Geography, Professor S. B. Potakhin. At the request of KIRO, the organizer of the Olympiad stage, students from group 035 A. Pekshueva and E. Khakan were invited as volunteers, who successfully completed the assignment.

Schoolchildren from Petrozavodsk, Kondopoga and other cities and regions of Karelia took part in the Olympiad.

The tasks of the Olympiad were very difficult, they included theoretical, practical and test parts. The first theoretical round contained questions related not only to geography, but also to knowledge of world literature: only knowing the title of the work, it was possible to correctly answer the question about the shape of the relief and describe the geographical features of the formation of the object.

The practical part required not only the ability to solve geographic problems, but also knowledge about the economic situation in Russia and the world. In the third round, students answered test questions.

It should be noted that the tasks fully revealed the creative potential of students, their erudition and knowledge of the sections of geography. It should be noted that from year to year the assignments become more and more difficult and require in-depth study of the subject. Knowledge of only the school course of geography is not enough to cope with the questions of the Olympiad,

– noted the organizers of the Olympiad.