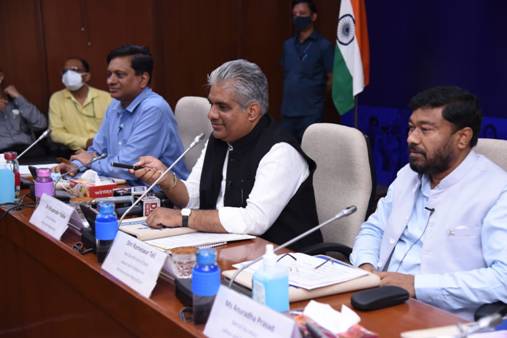 New Delhi: Minister for Labour and Employment, Shri Bhupender Yadav today formally launched e-Shram portal and handed it over to the States/UTs in the presence of the Shri Rameswar Teli, Minister of State for Labour &Employment and Petroleum & Natural Gas.

“For the first time in the History of India, a system is being made to register 38 crore Unorganised Workers. It will not only register them but would also be helpful in delivering of various social security schemes being implemented by the Central and State Governments”, said the Labour Minister emphasising that it is another key milestone towards furthering the vision of Prime Minister Shri Narendra Modi towards the welfare of the unorganized workers, who are the nation builders of India.

On this occasion, Shri Bhupender Yadav also thanked the Prime Minister for sanctioning of Rs 2.0 Lakh Accidental Insurance cover to every registered unorganised worker on eSHRAM Portal. If a worker is registered on the eSHRAM portal and meets with an accident, he will be eligible for Rs 2.0 Lakh on death or permanent disability and Rs 1.0 lakh on partial disability and government is always committed for the welfare of the workers.

Shri Rameswar Teli, Minister of State for Labour & Employment and Petroleum & Natural gas while highlighting the features of the e-SHRAM Portal, which inter-alia are creation of a National database of all unorganized workers ,also appealed to the people of the country to be part of this campaign and get all unorganized workers registered on the E-Shram portal and become a partner in fulfilling the much-needed goal of the Government of India: “छूटेगा नहीं कोई कामगार, योजनाएं पहुचेंगी सबके द्वार.”

On this occasion, both Ministers also interacted with the workers from Ajmer, Dibrugarh, Chennai and Varanasi who virtually connected from the Common Service Centreswho shared their experiences and expectations. Shri Yadav and Shri Teli also briefed them about accidental Insurance Schemes and explained benefits for registering on the portal.

Stating that the portal is going to be major turning point and game changer in the history of the country, Shri Apurva Chandra, Secretary, Labour Ministry said that more than 38 Crore unorganised workers (UW) in the country, will be registered under one portal and the registration under the e-SHRAM portal is totally free and workers do not have to pay anything for his or her registration at Common Service Centres(CSCs) or anywhere.

Shri Chandra further informed that upon registration the workers shall be issued aeSHRAM card with unique Universal Account Number (UAN) and will be able to access the benefits of the various social security schemes through this Card anywhere anytime.

Labour Ministers of States/ UTs along with Chief Secretaries, Additional Chief Secretaries, Principal Secretaries (Labour), Labour Commissioners of all States/UTs virtually joined the launch function from their respective states. All the field offices of the Labour Ministry and Labour Departments of State Governments along with Regional Offices of EPFO and ESIC are also attending the function. The launch event was also being joined by over 4 lakh Common Service Centres (CSCs) who have a key role in the registration of the unorganized workers.

The demonstration of the portal has already been given to all States/ UTs during the 1st and 2nd pre-launch meetings held with them during July/ August. In this respect, the detailed guidelines for operationalization of portal and mobilization of workers have already been issued to the States/UTs. Considering the COVID situation, it was decided to launch the portal VIRTUALLY and hand it over to the states for commencing the process ofRegistration of Unorganised Workers all over the country.
The Union Labour Minister on 24th August, 2021 also interacted with leaders of the major Central Trade Unions of the country viz. BharatiyaMazdoorSangh (MS), Indian National Trade Union Congress (INTUC), All India Trade Union Congress (AITUC), Hindu Mahasabha (HMS), Centre for Indian Trade Union (CITU), All India United Trade Union Centre (AIUTUC), Trade Union Coordination Centre (TUCC), Self-employed Women’s Association (SEWA), United Trade Union Centre (UTUC), National Front of Indian Trade Unions (DHN).

All the leaders of the Central Trade Unions expressed that this will be a game changer for the well-being of unorganized workers who are the nation builders of the country and told in clear terms thatall the Central Trade Unions and their field formations in the States will give its unflinching support to the honorable cause of registering unorganized workers in the e-SHRAM portal.

U.S. Department of Education announced it will make $1.1 billion in closed school discharges available to an additional 115,000 borrowers who attended the now-defunct ITT Technical Institute