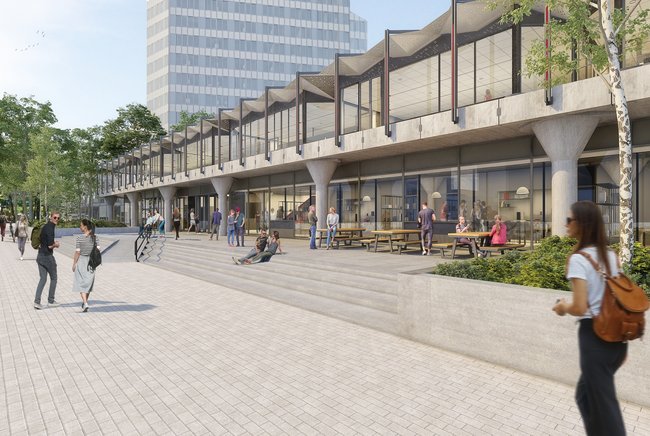 The Laplace building, which is to undergo renovation to house the Eindhoven Artificial Intelligence Systems Institute (EAISI), will be named Neuron. Neurons are the basic elements of the brain, which makes Neuron a very appropriate name to accommodate scientists doing groundbreaking research into artificial intelligence. No fewer than four entrants in the name competition submitted this name, independently of each other.

The competition
Last year the TU/e names committee held a competition to rename the Laplace building, which is to be renovated. Of the 180 entries, four suggested the name Neuron. A group of future users of the building – students and staff – were able vote to make the final choice. The name Neuron, which is inextricably linked to thinking and intelligence, was the top choice by far. The four prize winners will receive a copy of the Historical Atlas of Eindhoven, which will be published shortly. This book contains a chapter entirely devoted to the TU/e campus.

The name Neuron
The human brain contains about 100 billion neurons; microscopic signal processors, which as a network together form the basis of the phenomenal intellectual capacity of humans. Scientists at the EAISI are also realizing intellectual capacity with artificial intelligence, to help people find solutions, for example in the field of health. Another interface between the new name and the field of AI is in “neural networks,” one of the AI research areas. In addition, the name Neuron in general is a reference to all the brainwork that goes on at the university.

TU/e Executive Board President Robert-Jan Smits believes that the competition produced a very suitable name. “The word neuron exists in both Dutch and English and is internationally associated with flexible intellectual capacity. Moreover, it is brainpower that comes about in a network, just like the innovation capacity of the Brainport network, in which TU/e and EAISI play an important role.”

Artist impression of interior of Neuron after renovation.
The renovation
Last month the last bits of asbestos were removed from Laplace, opening the way to the actual renovation, in the year of the TU/e’s 65th anniversary. Team V made the architectural design, the technical aspects of which are currently being detailed. The renovation will start in the second quarter of this year.

Despite the Corona restrictions, it appears that construction will be completed on schedule, before the start of the new academic year in September 2022.

The building was built in 1972. The old name of Laplace refers to the 18th-century mathematician Pierre-Simon Laplace. Among other things, he is known for the Laplace transformation.