The health and economic crisis linked to the COVID-19 pandemic is having a profound impact on the global cultural ecosystem. The restriction measures taken by many countries have drastically curtailed access to culture and have disrupted the cultural sector as a whole. In the face of the unprecedented nature and scale of this crisis, what is the public policy response?

The Report of the Online Meeting of Ministers of Culture, Impact of the COVID-19 pandemic on the cultural sector and public policy response, gathers the Ministers’ reflections on the impact of the health crisis on the cultural sector in their respective countries, as well as their preliminary assessment of such impact, the identification of needs, and anticipated responses to the crisis to support the resilience and recovery of an already fragile sector in this unprecedented upheaval. 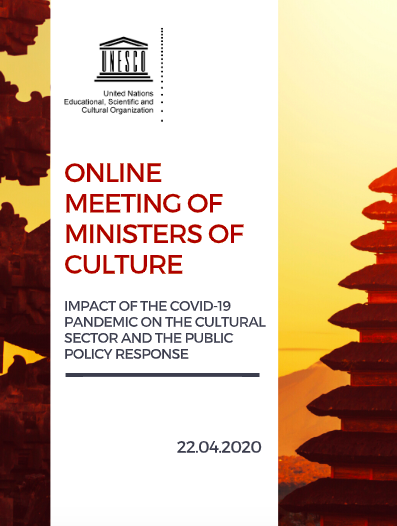 In this period of uncertainty, culture has once more shown that it unites communities in difficult circumstances. It creates bonds of solidarity to face physical distancing, strengthens our collective and individual resilience, and provides a sense of hope. The current crisis calls for reinvestment, more than ever, in international cooperation and intergovernmental dialogue, in order to rally efforts, and build a shared reflection on ways to strengthen the culture sector. Beyond emergency actions, countries are called upon to anticipate the medium and longer term consequences of the crisis on the cultural sector as a whole as well as their responses.

The first part of the Report examines the profound repercussions of the crisis on the cultural sector and priority action areas. Ministers outlined the tourism sector – on which the cultural sector is heavily dependent – but also museums, the cultural production and the livelihoods of artists and cultural professionals in all fields of the creative economy. Specific attention is also given to the socio-economic impact of the interruption of many cultural practices, and expressions, including in the craft sector. The negative impact on cultural diversity and social inclusion is also highlighted, as the crisis unveils increasing inequalities, especially in terms of digital access.

The second part of the Report highlights the efforts undertaken or foreseen by Member States to mitigate the social and economic impact of the crisis on the cultural sector. Among the announced measures, ministers are working to ensure access to online culture and cultural resources. This includes the creation and adaptation of new cultural content, the development of synergies between culture and other sectors such as education and health, or the setting up of special culture funds and innovative financial mechanisms for the sector recovery.

The final part of the Report points out opportunities and risks for the cultural sector of tomorrow. On the road to recovery, Member States identified areas of opportunity for the cultural sector, notably accelerating the digital transformation and developing diversified online content, strengthening the evidence-basis of the weight of the culture sector on the economy of countries, including in the non-formal sector; and the importance of synergies between culture and education, including in lifelong learning. Member States are calling upon the cultural sector to amplify the synergies with other fields of public policy, to rethink economic models and set concerted action lines.