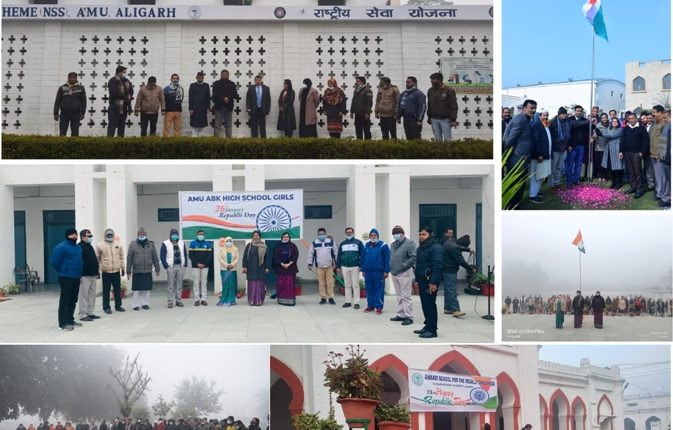 Aligarh, January 27: Various faculties, departments, offices, residential hostels and schools of Aligarh Muslim University (AMU) were decorated with colourful lights as the university community joined the festivities to mark the celebrations of the 73rd Republic Day, the day Constitution of India came into effect and thus, turning the nation into a republic.

At the Women’s College, the Principal, Prof Naima Khatoon unfurled the National Flag and delivered a speech on preserving, protecting and upholding the sanctity of the Indian Constitution.

She added: “Republic Day represents the true spirit of the independent India and is celebrated with much pomp all across the country. This day also commemorates Indian citizens’ power to choose their government democratically”.

Prof Naima motivated the faculty members and the non-teaching staff to responsibly cast their votes for the progress of the Country.

Leading the celebrations at the Dr Z A Dental College (ZADC), Prof R K Tiwari (Principal) urged the faculty members and other staff to remember the sacrifices made by the heroes of the Country in giving us the freedom and drafting the Constitution.

“It is because of our great leaders that today we enjoy our rights that came with the Constitution”, he added.

The National Flag was unfurled at the Dawakhana Tibbiya College by Prof Salma Ahmed (Member-in-Charge) as staff members joined the celebrations in high spirits.

Naghma Irfan, Principal of the Senior Secondary School-Girls led the festivities at the school with the unfurling of the National Flag.

She also spoke on the contributions of the great Indian leaders in drafting the Constitution.

Similarly at the Ahmad School for the Visually Challenged, Dr Naila Rashid (Principal) unfurled the Flag and delivered a speech on how the Constitution of India was adopted.

Cultural activities were also organized at the School to mark the occasion.

Amna Malik, Principal of the AMU Girls’ School unfurled the Flag and delivered a talk on the rights and duties enshrined in the Constitution.

She urged all school staff to perform their duties towards the Nation.

After the Flag unfurling ceremony at the Abdullah School, Umra Zaheer (School Superintendent) delivered a talk on the importance of the Republic Day.

“Today, let us pledge to protect our Constitution and everything that it stands for”, she said, speaking to the teachers, students and other staff members.

“Republic Day is the day to reaffirm our commitment to unity in diversity, fraternity and equality among all our citizens”, said Dr Samina (Principal, AMU ABK High School-Girls) in her Republic Day Speech at the School.

In his Republic Day speech at the AMU City Girls High School-Qazi Para, Dr Md Alamgir (Principal) spoke on the various rights enshrined in the Constitution such as right to equality, right to freedom, right against exploitation, right to freedom of religion, cultural and educational rights and right to constitutional remedies.

He also unfurled the National Flag as the school staff joined the celebrations.

Speaking with the staff members after the National Flag unfurling ceremony at the Sir Syed Hall-North, Prof Md. Tarique (Provost) said: “Our Constitution provides us with the Right to Equality irrespective of caste, class, religion and linguistic backgrounds. Indian identity is respected and honored all across the world because of our rich culture and values”.

All wardens and staff members of the Hall participated in the festivities.

At the Abdullah Hall, Dr Ghazala Naheed (Provost) unfurled the National Flag followed by speeches of Dr Khalida Tarannum and Dr Mohd Rashid on the Constitution of India.

In the similar fashion, staff members and wardens of the Sir Shah Sulaiman Hall attended the celebrations which began with the unfurling of the Flag by Prof Shamshad Husain (Provost).

At the Aftab Hall, Dr Salman Khalil (Provost) unfurled the Flag in the celebration attended by all wardens and staff members.

He also spoke about how the Indian Constitution was drafted and the sacrifices made by great leaders during the freedom struggle.

The students and faculty members at the National Service Scheme (NSS) of the university also observed the occasion with the unfurling of the National Flag by Dr Arshad Husain (Programme Coordinator).

Later in a speech, Dr Arshad emphasized the importance of the Republic Day and stressed on the need of honesty in public life for the development of the Country.

University of São Paulo: Never seen so many humpback whales off the coast of São Paulo as in 2021