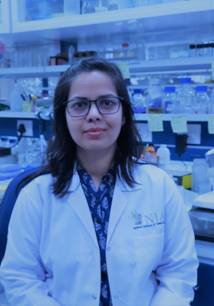 Dr. Sonu Gandhi, a Scientist at the National Institute of Animal Biotechnology (NIAB), Hyderabad, who has recently developed a smart nanodevice for the detection of Rheumatoid arthritis (RA), cardiovascular disease (CVD), and Japanese encephalitis (JE), has been awarded the prestigious SERB Women Excellence Award.

The smart nanodevice developed by her group helped in detection of the biomarkers of the diseases using graphene functionalised with amine and conjugated with specific antibodies.

The developed sensor offers several key advantages, such as ultra-high sensitivity, ease of operation, and a short response time, that can be easily integrated into a chip for point-of-care testing. The developed sensor exhibited a clear advantage over conventional techniques, and it is highly sensitive. They can improve early diagnosis of the diseases, ensuring prompt, more effective, and less expensive treatment.

University of Exeter: Breakthrough in quest to control light…

University of Edinburgh: Most stillbirth certificates are…

Her work is based on understanding the mechanism of interaction between nanomaterials and biomolecules on the surface of devices called transducers that receive energy from one system and transmit it for the development of a new generation of biosensors for clinical diagnosis of bacterial and viral disease, veterinary and agricultural applications, food analysis and environmental monitoring.

Dr. Sonu’s lab has developed electrochemical as well as a microfluidic-based nanosensor for detection of pesticides used primarily to control foliage and soil-borne insect pests in Fruits and Vegetables. In a parallel study, her lab has developed ultrafast sensing of a biomarker of cancer. The developed cancer biosensor called urokinase plasminogen activator receptor (uPAR) may be used as a quantitative tool, making it a tenable alternate for the detection of uPAR in cancer patients. This work has been published in the journal ‘Biosensor and Bioelectronics’.

Recently, her lab has fabricated quick, sensitive microfluidic devices for toxin (Aflatoxin M1) detection in milk and meat samples with specific molecules called aptamers. They have developed microfluidic paper device for rapid detection of aflatoxin B1 for on-site detection of food toxins for both qualitative and quantitative analysis in food safety. One of her present projects aims to detect multiple sarovars of Salmonella using CRISPR-Cas13 and Quantum dots based electrochemical biosensors for sensitive, cost-effective and rapid diagnosis for one health aspect.

They are focusing to develop new cost-effective and field-applicable analytical devices which offer Point of Care (POC) diagnostics for early detection of disease, facilitating timely management to resolve the healthcare problems.

[For more details, Dr. Sonu Gandhi (gandhi@niab.org.in) can be contacted.]

Artificial photosynthesis to provide solutions for carbon capture and conversion

University of Exeter: Breakthrough in quest to control light to evolve next…

University of Edinburgh: Scholarship launched for students impacted by conflict

University of Exeter: Breakthrough in quest to control light to evolve next…

iednewsdesk Jun 22, 2022
The team of researchers, including Dr Oleksandr Kyriienko from the University of Exeter, has shown that…

University of Edinburgh: Scholarship launched for students impacted by…

University of Bristol: Inability to stand on one leg in mid to later…

University of Bremen: Algae mats as a haven for many animals in the…