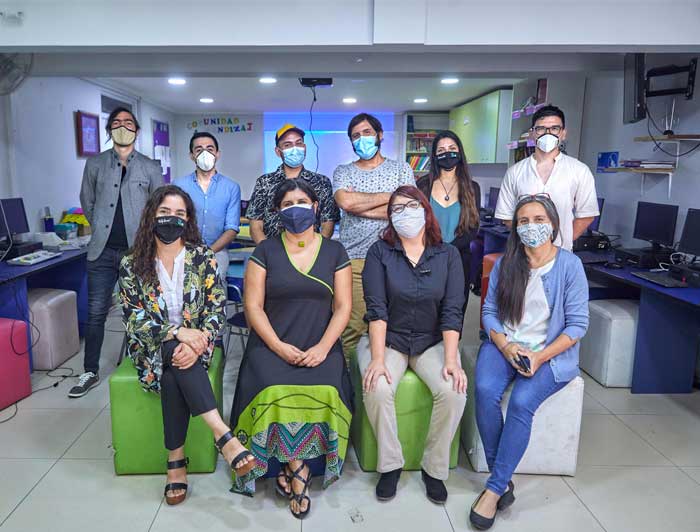 The idea is to replace the traditional diagnostic tests with a board game, which makes it possible to assess the level of boys and girls who have been out of the school system and who seek to resume their educational careers. The technology, promoted by the EduLab UC Innovation Laboratory, will be integrated into the schools of the Fundación Súmate del Hogar de Cristo.

Within the framework of the Education Challenges program, promoted by the EduLab UC Innovation Laboratory , the Fundación Súmate del Hogar de Cristo presented the challenge of building a diagnostic system for those who enter its schools, which would offer an innovative alternative to the formats traditional evaluation.

To face this challenge, the team led by Patricia Guerrero , an academic from the Faculty of Education , was selected , along with doctoral students in Education and Sociology; the Mapu Praxis team , an organization of teachers dedicated to the generation of dialogic and collaborative learning spaces, and also, the company that develops board gamesWithin Play .

The proposal prepared by this team, called “Skill-Mind”, consists of a diagnostic instrument based on game-based learning, which seeks to provide guidance regarding the educational level to which those who wish to complete their schooling should be reintegrated.

“Our purpose was to articulate the contributions of popular education with traditional education. That is where this EduLab UC program appears, where Fundación Súmate proposes a challenge to work on the diagnosis for readmission in their schools. So we partnered with popular educators and Within Play to carry out interdisciplinary work, “says Professor Guerrero, continuing:” As UC researchers we took charge of the investigation and diagnosis; The creation of the selection was carried out by Mapu Praxis and the professors of Fundación Súmate; and finally, Within Play was in charge of integrating all the work into a gaming experience ”.

Alien invasion
Four students from the establishment were responsible for evaluating the stages of this game, which focuses on the liberation of a group of people from an alien invasion: “It was entertaining. I had to help a group of people survive. Also, they gave me the option to comment on the development of the game, the mobility of the cards and the puzzles. With this game, the test to enter the school is not so stressful, you also enter knowing someone because you can develop the test with other people. a lot of support from the teachers, that makes it less tense ”, says Karen Maureira (19), who has been at the Padre Álvaro Lavín Reentry School for two years .

“It is an innovative project that puts the principles of action research at the service of educational problems in specific contexts, thus fulfilling the mission of the university. One of the most valuable aspects is that this project manages to integrate the evaluation of curricular content with socio-emotional aspects, thus contributing to the development of comprehensive learning, in a context such as that of the students who attend the institutions led by the Súmate Foundation, where this comprehensive support and mediation, with special attention to the socio-emotional, it is particularly relevant “says Lorena Medina, Dean of the UC School of Education.

The instrument offers the possibility of living an experience for one to four players, lasting approximately 90 minutes, in which each student is encouraged to enhance their autonomy and collaborative work. For this, it is based on the contents of the first intermediate level proposed by Fundación Súmate for the education of young people and adults, to which indicators for the evaluation of socio-emotional skills are also associated, which Súmate seeks to share with those who enter its community.

The piloting of this development was carried out throughout 2020 in virtual mode, with the team of the Colegio Padre Álvaro Lavín, dependent on Fundación Súmate. It is expected that starting in 2021, this instrument will be used in all of the foundation’s establishments, along with seeking more opportunities to continue the development of this line of research.

“It is much less stressful than a traditional test. Those who participated said that one of the characteristics is that they never felt evaluated, which makes the stress of an evaluation process disappear ”, says Diego Caro, head of EduLab UC.

“For us it was an incredible experience to be able to work with Súmate, since they address a central problem in the educational world that is often invisible, and to which we were interested in providing solutions, which is educational reintegration. Furthermore, the work experience throughout this year showed us that the model of this foundation is deeply innovative, so much so that many of its strategies should be used by the regular education system ”, adds Caro.