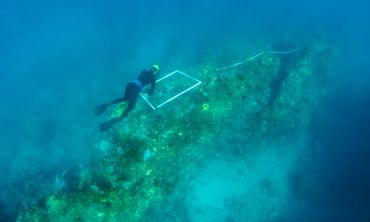 Hurricanes, pollution, disease, bleaching and the effects of an increasingly warmer planet are all negatively impacting the health of coral reefs around the world. However, those in the Caribbean are facing a new threat — an aggressive, golden-brown, crust-like alga that is rapidly overgrowing shallow reefs.

Marine biologists from the University of Oxford, California State University Northridge and the Carnegie Institution for Science, have been studying the biology and ecology of this alga on these reefs for the past four years. Today in Scientific Reports they describe this new threat and what it might mean for reefs already teetering on the brink of collapse.

Dr Bryan Wilson from the Department of Zoology, University of Oxford, said: ‘This alga seems to be something of an ecological winner in our changing world; it aggressively occupies any vacant space on the reefs, rapidly overgrows and kills live corals, prevents free-swimming coral larvae from settling on the benthos and becoming adult colonies, and is unaffected by the regular destructive hurricanes that sweep through the area.

‘It is also seemingly resistant to grazing by fish, and as far as we know, is only fed upon by a single creature, the black spiny urchin (Diadema antillarum), once ubiquitous and abundant in the Caribbean, but which was effectively wiped out in the 1980s by a mysterious disease.’

Professor Peter Edmunds, who has studied these reefs for over three decades, first spotted the alga five years ago while he was studying the impact of two back-to-back Category 5 hurricanes — Irma and Maria —on the coral reefs near the Caribbean island of St. John in the U.S. Virgin Islands. He was stunned by how quickly the alga began to dominate the reef.

Together, the researchers have since been able to document how PAC are aggressively taking over such large areas of space on some of the shallow reefs of St. John. PAC is occupying so much of the benthos that it is discouraging larval corals and other sea life, including sea urchins, from making the reef home, which, in turn, jeopardizes the persistence of the reef community itself.

Dr Bryan Wilson, from Oxford University’s Department of Zoology, said: ‘In an ongoing mission to try and understand why this golden crustose alga is suddenly spreading over Caribbean reefs, our research has initially looked into the microbiology of PAC and compared it with that of close relatives (the crustose coralline algae, or CCA) which are known to stimulate the recruitment of coral larvae to reefs.

‘Our key finding was that PAC somehow inhibit the growth of beneficial marine bacteria which otherwise, in association with CCA, produce chemical compounds – almost like pheromones – which beckon and call coral larvae to the seafloor. And so areas of the reef taken over by PAC are unlikely to host corals again.’

The scientists noted that PAC, with its dark brown and dirty orange veneer, stands out among the white sands and light greens, pinks, yellows and other colours that make up the reef. It’s unclear if PAC is made up of one algal species or several, nor do they know what is causing the alga’s spread to have accelerated throughout the region in recent years.

Professor Edmunds said: ‘What we do know is that this is an alarming trend, and one the we need to know more about. The coral and their ecosystem are so fragile as it is. They are under assault by environmental pollution and global warming. We have made their lives so fragile, yet they are sticking in there. And now this gets thrown into the mix. We don’t know if this is the straw that breaks the camel’s back, but we need to find out.’

The next stage of this research is to unravel the alga’s complex physiological mechanisms for this ecological success – and Dr. Wilson is currently delving into the recently obtained genome of the alga, which it is hoped will illuminate these further.

The researchers ultimately hope to find ways to mitigate against this new threat.

University of Aberdeen: University part of UK-Japanese research collaboration to…

University of Manchester: Pandemic ‘shielding’ led to two-fold rise in…