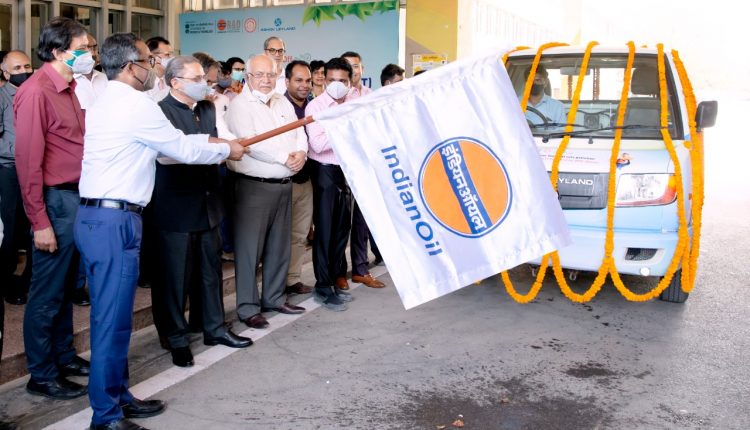 New Delhi: Researchers from the IIT Delhi’s Department of Energy Science and Engineering (DESE), Indian Oil Corporation (IOC R&D), and Ashok Leyland Ltd. have developed a technology, which enables a diesel-powered automotive vehicle to run in flex fuel mode i.e. either 100% diesel or Dimethyl Ether (DME) plus Diesel mode. The project was funded by the Department of Science and Technology (DST), Government of India.

The flex fuel engine technology for use of DME is developed by IIT Delhi, and IOC R&D undertook the endurance and field trials tests and developed the dedicated engine oil with the technical support of Ashok Leyland.

Dimethyl Ether (DME) is one of the alternative fuels to compression ignition engines/vehicles as it has a higher cetane number (~58) than that of conventional diesel (51). DME can be produced from Biomass, Coal, Industrial Wastes, Municipal Solid wastes, Black liquor (a by-product of pulp) through gasification and the Fisher-Tropsch synthesis process. It can also be produced via catalytic dehydration of methanol. DME is generally stored in liquid and phase change from liquid to vapor/gas could easily occur at the ambient temperature and pressure.

Speaking about the flex-fuel automotive vehicle technology, Prof K. Subramanian, Head, Department of Energy Science and Engineering, IIT Delhi said, “DME fuel is injected into the intake manifold of the engine, and diesel is directly injected into the engine cylinder. The CRDI system controls both diesel and DME fuel injection with respect to the load. The engine/vehicle operates with the optimum DME energy share without a knock.”