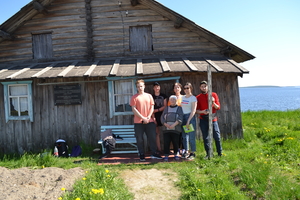 Restoration students in practice in Kalevala

For the first time, students-restorers take part in the work of a complex scientific expedition.
Within the framework of the complex research expedition “Kalevala 2021”, a group of undergraduates studying in the direction of “Restoration and adaptation of objects of wooden architecture” – Alexander Tikhonov, Anton Ryamyakov, Ksenia Efimova – under the leadership of Elena Igorevna Ratkova, together with the Office for the Protection of Architectural Monuments and Scientific – Research Institute of Historical and Theoretical Problems of Folk Architecture of PetrSU (NIINAZ) conducted a survey of objects of cultural heritage of the 17th-19th centuries.

In the course of the work carried out, measurements of buildings were made, their technical condition was determined, and a huge amount of photographic material was taken to create, in the future, 3D models, including the most important details of structural elements and interiors of houses.

According to the data obtained, it is possible to draw a “time line” on which it is worth noting the history of objects and the fact how they have changed throughout their existence.

On June 7, work was carried out in the village of Kalevala, at the objects of the 19th century, namely, the barn from the estate of V. Jamanen, where E. Lönnrot stayed and wrote down the runes (35 Väinemeinen St.), and the residential house of F.N. Feklistova and V.N. Karhu (Väinemeinen street, 70).

Currently, Valentina Filippovna Vatanen, born in 1940, lives in the barn.

On June 8, a survey of 17th century objects was carried out in the village of Haikola.

Three buildings were measured and photographed: Kuzmin’s house (Ontontalo), Kuzmin’s barn and Stepanov’s barn. June 9, 10 and 11 are also devoted to the survey of wooden objects on the territory of Kalevala, which have not yet been studied from a scientific point of view.

Classes for schoolchildren on the “Nanocoatings” module