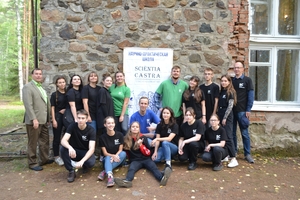 From August 16 to August 20, the scientific school “Scientia Castra” was held on the basis of the sports and recreation camp “Shotozero”. Scientia Castra is a five-day educational and applied course for PetrSU students wishing to study science. The school is organized annually by the members of the Council of the Student Scientific Society of PetrSU.
Scientia Castra aims to popularize science among young people, develop their skills in scientific project activities, as well as strengthen interdisciplinary dialogue.

More than 20 students, including from St. Petersburg State University and Novgorod State University, took part in the scientific school. In addition, 5 experts and 6 visiting lecturers were involved in the work of the school.

Each participant of the school has a plan of individual scientific work for the 2021/2022 academic year, with the planned result – a scientific article;

– on the study of the encirclement of the 337th rifle regiment of the Red Army near Reboli in the fall of 1941; (tutor – Denis Popov, 2nd year student of IIPSN). This regiment was surrounded by a slightly outnumbered enemy forces, however, was able to get out of the encirclement. The project is based on the study of archival sources of the Central Archive of the Ministry of Defense of the Russian Federation (TsAMO).

– on the influence of the consequences of forest fires on the respiratory function of human lungs (tutor – Natalya Chechkova, 1st year master student of IBEAT).

During the school, the ties between the members of the SSS Council were strengthened, the subsequent work of the society was adjusted.

The Scientia Castra Science School was very productive and eventful. For the first time, it was attended by students from different regions, as well as world-class lecturers. So, for example, Artyom Nikolaevich Ermilov, Ph.D, the author of many international scientific projects in various fields of physics, was the permanent expert of the school,