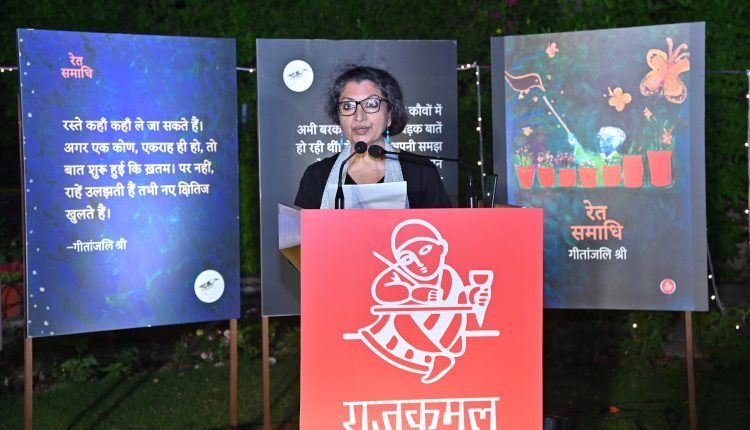 New Delhi – Senior writer Geetanjali Shree’s novel ‘Ret Samadhi’ has attracted the attention of the entire world towards Hindi literature by registering its name in the longlist of International Booker Prize 2022. This is an unprecedented phenomenon, which has opened new avenues for Hindi and other South Asian languages at a global level. These views came out at an event organized by India’s leading publishing house Rajkamal Prakashan, to celebrate the success of ‘Ret Samadhi’ in which prominent literary figure of the country came together to raise a toast. Eminent writers and thinkers such as Ashok Vajpeyi, Harish Trivedi, Purushottam Agarwal, Virendra Yadav, Vandana Rag spoke eloquently about the book and the ripples it has created in the literary sphere.

Ret Samadhi has been published by Rajkamal Prakashan in Hindi, whose English translation has been included in the long list of International Booker Prize. This is the first book in Hindi that has been included in the list of this prestigious award. To commemorate this historic occasion, Rajkamal Prakashan organized a function in the Rose Garden of India International Centre on Sunday in which many eminent litterateurs and literary enthusiasts attended. The event began with Syeda Hamid reading the excerpts from the novel.

The International Booker Prize is awarded annually to a book translated into English and published in the UK or Ireland. The English translation of ‘Ret Samadhi’ published by Rajkamal Prakashan is titled ‘Tomb of Sand’ and has been translated by Daisy Rockwell.

Geetanjali Shree, expressed her thanks and gratitude to the august gathering that had assembled in her honour. She thanked senior authors, family, friends and Rajkamal Prakashan with a few lines from her novel.

English translator Daisy Rockwell said in her message (which was read during the event) that, like a fine wine, the recognition of the talented literary genius is sometimes late. Ret Samadhi is a complex and rich novel, which, even after reading it again and again, deepens the wonder and thrill. I can say this undoubtedly because I myself have read it again and again while translating. It takes time to understand it completely because our small jalebi-minds cannot do this work alone. It was published in 2018. Even after four years, people are reading it in English and French as well in Hindi.

French translator Anne Motad said in her audio message, ‘The pace of the story of the ‘Ret Samadhi’ is another mystery, sometimes stopping for fifty pages, sometimes suddenly going very fast. Sometimes peace is like a river, sometimes it gasps, sometimes with very long lines and sometimes very short ones. Just as it is said that everything is found in the Mahabharata, in the same way it can be said that the whole of India lies in Ret Samadhi.

Writer Vandana Raag at the event said, ‘The opulence of this book cannot be contained in a few things. This is also a political novel, we cannot just dismiss it as it talks about relationships, in this novel the commentary on politics is also easily done.

Senior author Harish Trivedi at the event said, “It is an unprecedented event to be included in the Booker Prize long list, it is a sign of a new age, when this book was published first in 2018, people were surprised to see it and this novel has been on people’s radar since then.”

Writer Virendra Yadav said on this occasion, ‘’The Booker Prize had set many boundaries to be included in its long list. Geetanjali Shree has not only broken these boundaries but has also crossed those boundaries. This achievement has opened the way for Hindi and other South Asian languages both internationally and globally.”

Senior author Purushottam Agarwal congratulated Geetanjali Shree by saying, “This story enriches our senses and on the other hand tries to remind us of the tricks of reading we have learned and what we have forgotten. As a reader, this novel enriches my sensibility and challenges it as well.”

Congratulating the author on her participation in the Booker Prize, senior author Ashok Vajpeyi said, “Geetanjali has destroyed the common perceptions of reality and created a colonial reality and that colonial reality is similar to the reality around us and it goes across borders too.

Ashok Maheshwari, Managing Director, Rajkamal Prakashan in his concluding remarks said; Coming in the Booker’s Long List, Ret Samadhi has attracted the attention of conscious readers, writers and publishers of all languages of the world. In Indian languages, especially Hindi readers have been woken up. Ret Samadhi has put an end to the wait for some big creation in Hindi in recent years.