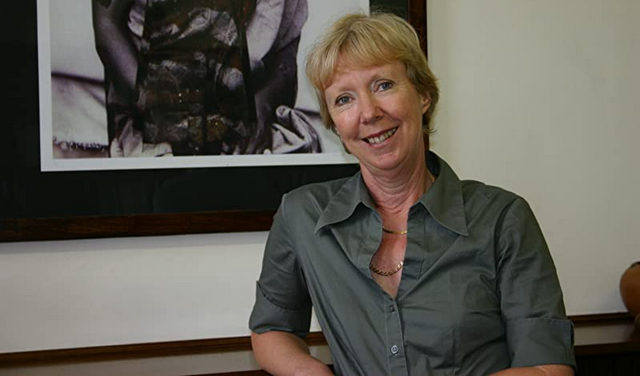 A seed of an idea that emanated from her empathy about obesity, a growing problem world-wide, is what motivated a Rhodes University alumna to write an unusual and provocative debut novel on the topic.

Emeritus Professor of Linguistics, Viv de Klerk’s book, ‘Not to mention’ depicts the difficulties, the suffering and the tragic humiliation that a young girl suffers because of her body. The lead character in the book, Katy Ferreira, is about to turn 21, but she is unable to get out of bed because she weighs 360kg.

In her loneliness, Katy finds comfort in the sweets and food her mother brings her, and yesterday’s crossword puzzles from the Herald. And she slowly devises her own ‘jumbo’ puzzle, using the clues as a way to express her shame, anger and frustration about the way she has been treated. The novel is written in the form of a diary / memoir / letter to her mother, and each of the cryptic clues relates to Katy’s memories, her dreams for the future and the awful reality of her body.

Prof de Klerk said writing this book has been an exhilarating experience, mentally and emotionally. “The shame surrounding obesity probably has caused untold suffering repeatedly over the ages – as it did for Katy. I wanted to depict the awful tragedy of a young girl’s undeserved humiliation because of her own body. In a way, obesity is just a metaphor for a more universal problem: the ‘othering’ of all those who live their lives on the edges of society. Those who are ‘out of place’ in the world because they do not look the same as most, do not speak the same language, or do not conveniently ‘fit in’,” she said.

Prof de Klerk completed her Bachelor of Arts, Honours and Masters degrees at Rhodes University (all cum laude), and then did a PhD at the University of Cape Town. She served as HOD of the Dept of English Language & Linguistics until 2007, when she was appointed Dean of Students. She took early retirement in 2014 in order to write fiction. Explaining the reason behind her novel, she said: “I have done extensive research on derogatory language and the sly and hurtful words that people use. Society in general is not kind to overweight people, who often find themselves mocked, ostracised, derided and looked upon with disgust. The sheer number of cruel and derogatory words in English, and in slang, for people who are overweight and don’t look ‘normal’ is striking, and I’ve used many of those words in the novel, trying to demonstrate their cutting power. I also did a fair amount of reading and research into the physiological and psychological characteristics of obesity and watched a few TV documentaries on the topic.”

A researcher at heart, she also explored copies of the Herald newspaper from the early 1980s in Rhodes University’s Cory Library. “I enjoyed gleaning evidence of the political turmoil in the country and selecting juicy and often grisly headlines to weave into Katy’s story. It surprised me to find how satisfying it has been to write a novel rather than academic articles and books. It was far more demanding than writing my PhD was, but very much more enjoyable,” she added.

Her book launch was interrupted by the national lockdown, and eventually there was a virtual launch in September 2020. She says the sales and publicity have been very good and she has been getting positive comments. “I am delighted to announce that Pan Macmillan have already signed me up for my second novel, provisionally titled Schadenfreude, which will come out early in 2022,” she said.

Prof de Klerk received the Gerald Kraak writing grant for the book. This is a grant for unpublished authors, and the competition is coordinated by the Jacana Literary Foundation. It is a mentorship worth R25, 000. The book is on sale at all major outlets in South Africa, on Loot and Takealot. Digital downloads are available on Amazon. The price ranges from R290 (Exclusive Books) to $10 on Amazon.

iednewsdesk Jan 26, 2022
A new enterprise offering nutritionally balanced pre-prepared meals for key workers and others has been launched…