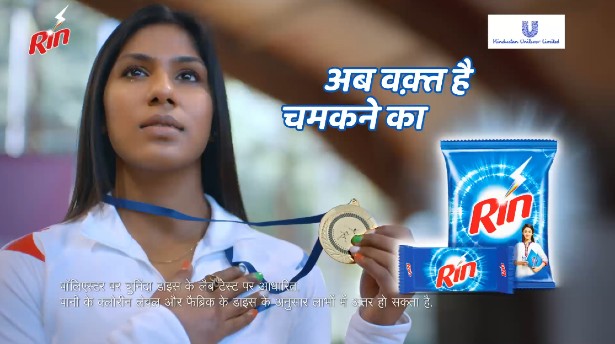 New Delhi: Rin detergent from the house of Hindustan Unilever has launched its latest campaign celebrating the inspiring story of C.A. Bhavani Devi, India’s first woman fencing champion to qualify for Tokyo Olympics 2021. From a humble background having chosen a relatively lesser-known sport of fencing, Bhavani had to overcome not just financial obstacles but also patriarchy led stereotypes. The TVC focuses on the heart-warming journey of Bhavani Devi and her struggle to keep her sporting dreams alive.

Bhavani with her determination and hard work perfected her skills in a relatively lesser-known sport while refusing to cede to the societal challenges levied upon her. Rin’s #AbWaqtHaiChamakneKa campaign demonstrates Bhavani’s tale of grit and gumption and the unflinching belief of a mother who supported her in this pursuit. The brand, which has always stood for ordinary people whose extraordinary actions have made the world stand up to take note, shares Bhavani’s story hoping to inspire several others on their journey to success.

The minute-long TVC opens with a shot of Bhavani practising fencing as a child and recalls the journey of her struggle against patriarchal notions, right from childhood to that of a successful fencer. Her first fencing kit was expensive in a household of limited means. Her mother financed her training by pawning her gold and encouraging her to never stop dreaming. Every day was a challenge, she went home exhausted with training gear dirty and soiled from the day but she never gave up and always showed up resolutely the next day. Finally, she goes ahead to win gold at the Commonwealth games and she holds up her gold medal as a fitting tribute to her mother’s faith and unrelenting support when says, ‘Dekho maa main sona vapis le aae.” The brand, through its core purpose-led narrative of lending brightness not only to clothes but to people with the inner passion, to better their lives and stubborn confidence in themselves & their ability to make it big, despite starting without privileges.

Commenting on the launch of the campaign, Prabha Narasimhan, Executive Director & VP – Home Care, Hindustan Unilever Ltd, says, “Rin has been an integral part of Indian households for over five decades now and has stood for people who are unwilling to be defined by preset roles and have the courage to pursue their dreams, undeterred by their socio-economic backgrounds. The brand stands for supporting and celebrating the progress seeker, individuals who pursue their dreams and demonstrate courage to rescript their destiny. Through our latest campaign, ‘Ab Waqt hai chamakne ka’, we endeavoured to showcase the glorious journey of Bhavani Devi, her mother’s sacrifices and their collective success and in the process inspire millions of others to keep persevering in their dreams, despite the odds. The essence of our brand aligns beautifully with such extraordinary stars who have risen from ordinary lives. We salute Bhavani for her dedication and wish her good luck as she prepares to represent India in Olympics 2021.”