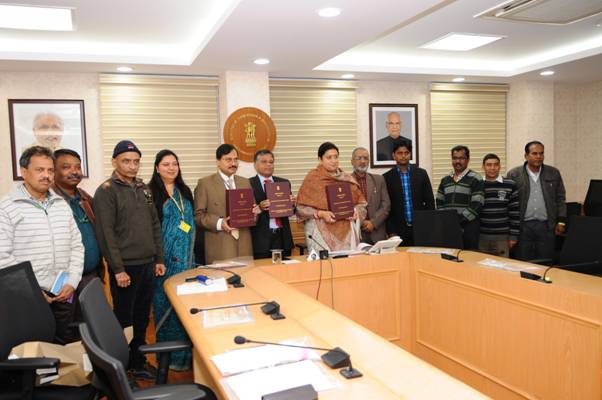 New Delhi: “Press in India 2016-17” an Annual Publication of the Registrar of Newspapers for India (RNI) was presented by Principal Director General Shri Ganeshan to Minister for Textiles and Information & Broadcasting Smt Smriti Zubin Irani in the presence of Shri N.K. Sinha, Secretary, along with other senior officials of the Ministry of Information and Broadcasting here today.

Speaking on the occasion, Smt Irani said, the publication was an important document to map the progress of the Indian newspaper industry in the last one year. The report gave a comprehensive analysis of the contours of the growth for the industry specially the growth amongst regional language publications. She further said that in this digital era the report has a seminal importance and assumes importance for the student community as well. She emphasized on the need to release this report digitally. She suggested that data in the report should be categorized genre wise. She said that data on publications in Regional language should be analysed, for its growth and dispersal.

On the occasion of 75 years of independence, let us work…

RNI is mandated under Section 19 (G) of the PRB Act, 1867 to submit an Annual Report to the Government every year on or before 31st December.

The Report is a compilation of the data available with RNI and the details submitted in the Annual Statements filed online by the publications across the country for the Financial year 2016-17. Press in India presents an indicative picture of facts and trends in the Indian Print Media. The report is of keen interest to print media, media analysts and research scholars.