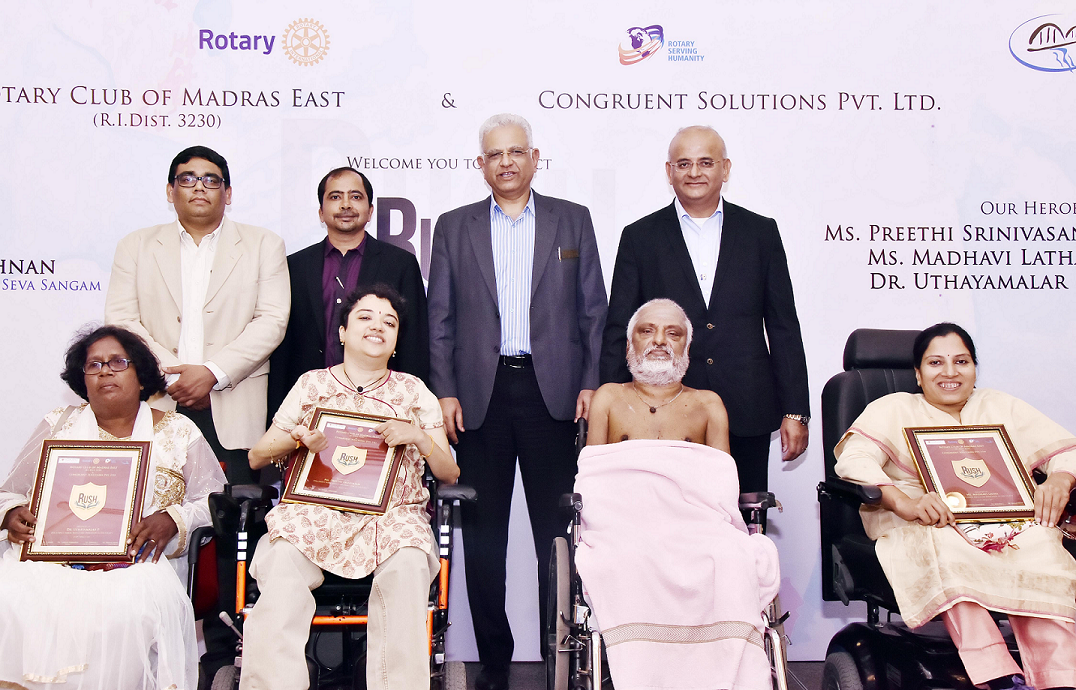 Chennai: The Rotary Club of Madras East (RCME) in association with Congruent Solutions Pvt. Ltd., today honored three unsung heroes under the project RUSH -Rotary Un-SungHeroes. The three women have contributed significantly to the society despite all the odds and adversities that came their way.

Ms. Preethi Srinivasan, a quadriplegic for nearly two decades is a proud founder of Soulfree, a charitable organization for rehabilitating those with spinal cord injuries. She said, “When I witnessed two quadriplegic suicide, I decided to start a foundation that will give them financial independence and stability. I would like to inspire many others to be happy despite what life throws at you, from my story.”

Ms. P. Madhavi Latha, who is 80% disabled due to polio is definitely an inspiration to all. She had been told by the doctors 10 years ago, that she might not live for more than a year, due to lack of physical activity. Despite all the negativity around, today, she holds four gold medals from the 1st State-level Paralympic Swimming Championship and two silver and two bronze medals from the 12th National Paralympic Swimming Championships.

Dr. P. Uthayamalar, started Bharatha Matha Home at Nandiyambakkam nearly 45 years ago. After the death of her parents, she was deprived and discriminated by the society due to her cast.” It all started when I met two orphaned children. At that point, I decided to raise them and now I am a proud mother for many such like me, she said. ”

Sri. S. Ramakrishnan, Founder & President, Amar Seva Sangam said “These three great women have proved that one needs to have the right will and passion to do something for the society and that will eventually lead us to our goal.”

Addressing the gathering, Rtn K. Ananth, President, Rotary Clubof Madras East said, “Attitude determines ‘altitude’. In this case all the three young women have in their own way tried to overcome their personal difficulties and disabilities and yet contribute to the society. We should be grateful that god has given us everything and strived to do more for the poor and down trodden.”

In the past, The Rotary Club of Madras (RCME) has honored Mr. Annadurai, an auto driver who is known for his innovation in customer service hospitality; Mr. Harigaran, a night school teacher who has devoted his life to educating slum children and Mr. Kumar M, a traffic cop who is known for his sincerity in maintaining zero accident service at his signal.

A synopsis of the three honorees:

Born in 1979, she was the captain of the under-19 Tamil Nadu women’s cricket team and led the state team to the national championships in 1997 at the age of 17. After surviving an accident that left her quadriplegic, she co-founded Soulfree.org, a foundation that champions the causes of restoring, rehabilitating, and re-integrating those suffering lethal spinal cord injuries and spreads awareness on its prevention among Indian youth. She was also a title-holder swimmer, having won a state gold in 50m breaststroke and silver in other events. She also delivers talks on disability issues. After her accident, she took up a Bachelor correspondence course in Medical Sociology from the University of Madras. She also holds interest in music, art, films and literature.

A M.B.A. in Banking & Finance with over 23 years experience in banking and financial services industries. She is also taking forward her passion in Sports. She is physically challenged with more than 80% disability due to Polio.

She is also the founder of “Yes We Too Can Movement” (Which is meant for encouraging the challenged people to take part in Sports with an emphasis on Swimming. Given her extensive experience with building Paralympic Swimming movement in Tamil Nadu, she is offering strategic leadership to build WBFI (Wheelchair Basketball Federation of India) as a full-fledged organization of excellence in promoting wheelchair basketball as a sport. Her Dream Project: Sports School for the Challenged People.

An Orphan, who runs an orphanage in the city outskirts, for over 45 years. She is the founder of Bharatha Matha Home at Nandiyambakkam, North Madras (near Minjur). She has dedicated her entire life for social service. She runs this orphanage home since her college days and has provided shelter, food, medical and education facilities benefitting 2000+ orphan kids. Currently there are 40 students and 5 adults. The resident students visit nearby government aided schools and few older students pursue their college education. This hero along with the kids manages all the affairs of the home till date based out of a remote location.