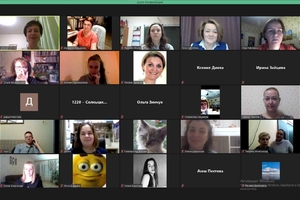 On December 4, within the framework of the distance republican conference “Dialogue of languages ​​and cultures in the ethnocultural educational space of the Republic of Karelia”, organized by the Karelian Institute for Educational Development, a round table “Regional component in teaching foreign languages” was held, organized by the teachers and students of the Institute of Foreign Languages. The online round table was organized by E.N. Vorotilina, the moderator was the head of the Department of German and French languages ​​of the Institute for Foreign Languages ​​at PetrSU I.A. Kotyurov.
During the meeting, the issues of creating a project in English for schoolchildren and students “Unknown Karelia” (O. M. Sherekhova, T. M. Tatarina, L. N. Yusupov Digital Stories for students in the areas of “Hospitality” and “Tourism” (OO Nikolaeva (KIYAGN)).

The participants were keenly interested in the experience of holding the days of Karelian culture within the framework of the international exchange “Petrozavodsk – La Rochelle” on the basis of the secondary school № 3 in Petrozavodsk, which was described by the French language teacher Elena Vasilievna Kuritsyna. The refraction of the regional component in teaching a foreign language at the university affected I.A. Kotyurov, thanks to which the joint project “Odyssey. Traveling the World” took place on the basis of the Department of German and French Languages ​​of PetrSU and the University of Brazil.

The results of her research in the field of translation and translation studies were presented by O.A. Veselovskaya, who made a presentation on the translation of regional realities during an excursion to the Karelian petroglyphs, and V.P. Petrov, who shared with the audience of the round table his recollections of twinning relations between Petrozavodsk and Tubingen (FRG) and the installation of the monument “Tubingen panel”.

K. Pereverzeva and A. Solnyshkov made student contributions to the discussion around the regional component in teaching foreign languages ​​with reports on the phraseology of creolized variants of the French language and the translation of regional Karelian realities in German journal texts.