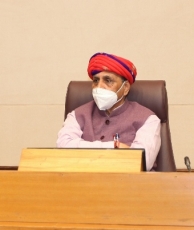 Ahmedabad: The royal family members of princely state of Saurashtra region today expressed their gratitude to Chief Minister Mr. Vijaybhai Rupani for his decision to construct a grandeur museum in the precinct of ‘Statue of Unity’ at Kevadia. The objective of the museum is to depict the “great history” of 562 princely states India and carry it to future generations. These 562 princely states had been successfully merged into India after independence by Sardar Vallabhbhai Patel to build ‘United India’.

Praising the dedication of the royals, the Chief Minister said that it was really praise worthy that the royal princely states surrender their states, which were built by their sacrifices and heroism, to merge them into India for the integrity of the country.

He expressed a confidence that the museum would provide inspiration to future generation through the historical, heroism, and prideful saga of these 562 princely states.

Mr. Rupani further stated that the inspiration to build the grandeur museum for the 562 princely states was given by Prime Minister Mr. Narendrabhai Modi. The state government would consider appointing the members of royal families into the committee for the construction of this historical museum, he added.

The state government is developing Kevadia as a complete tourist centre. The world’s tallest statue ‘Statue of Unity’ of Sardar Saheb is attracting more tourists than ‘The Taj Mahal’.

On the occasion, Mr. Rupani was honoured by the representatives of as many as 17 different institutions of the royals of Saurashtra.

Those who spoke on the occasion included Shri Mandhatasinh Jadeja of the royal family of Rajkot.

The management of the programme was conducted by Mr. R. D. Jadeja.