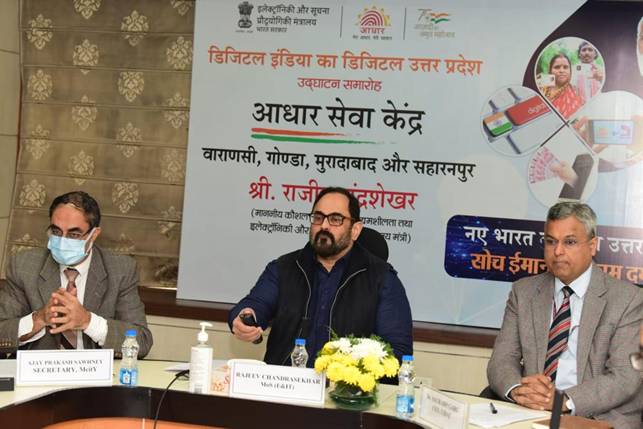 Rs 1.78 lac crore – savings made to public exchequer owing to use of Aadhaar and DBT: Rajeev Chandrasekhar

On this occasion, Rajeev Chandrasekhar congratulated everyone and said that this public facility is dedicated purely to the residents.

He spoke about the vision of PM Narendra Modi on Digital India, which lays out 3 broad outcomes for Technology to achieve in a developing country like India. These are:

Technology to transform the lives of citizens
To expand Economic opportunities
To create strategic capabilities in certain technologies
He quoted a former Prime Minister of India from the 80s, who had remarked that out of 100 paise of benefits, only 15 paise reaches the true beneficiary. Thanks to Digital India, 100% of all benefits reach the beneficiary through DBT. He credited the success of this transformation to the vision of PM Narendra Modi towards use of technology for Direct benefit transfer by making use of Aadhaar that has plugged all leakages from the system, eradicated middlemen & prevented corruption.

He later added that the savings made to public exchequer owing to use of Aadhaar and DBT, primarily due to weeding out of fake and duplicate beneficiaries, have been estimated to be to the tune of Rupees 1.78 lakh crores (as on Mar 2020; as per DBT Mission, Cabinet Secretariat).

In UP alone, benefits around Rs 2,74,934 Crore (cumulative) have been transferred directly in the accounts of beneficiaries. A total of around 15 crore people (in UP) have benefitted under the various Central/State Government Schemes through the Direct Benefit Transfer leveraging Aadhar. Therefore, “Aadhar is not just the World’s biggest Digital Identity Programme but also a tool for empowering people by securing their entitlements” said Minister Rajeev Chandrasekhar.

Citing how India has developed capabilities under the Digital India programme started by the Hon’ble Prime Minister in the year 2015, Mr. Rajeev Chandrasekhar mentioned about the indigenously developed CoWIN portal, which ensured over 138 crore vaccinations – a model that has been praised and is now being emulated by other countries. He also appreciated the Covid Management of the UP Government as it successfully leveraged technology by tapping a network of around 1.5 lac Common Services Centre (CSCs), 4.5 lac Village level Entrepreneurs (VLEs) to facilitate 18 crore vaccinations in UP which is ( 6 times the population of australia). This synergy between the Narendra Modi Government and the Yogi Government to transform lives of people through technology he referred as – “ Double Digital Engine Sarkaar”.

The Minister informed that due to the improvements in the overall Law and Order, Infrastructure – including road & air connectivity with new highways and airports coming up, UP is becoming a preferred destination for investments. Mentioning about the vast opportunity that lies ahead for the youth as Digital Uttar Pradesh looks to expand internet coverage giving impetus to its Digital Economy, the Minister added that “ The Combination of Highways and ‘i’ ways shall create tremendous opportunities for the youth of Uttar Pradesh turning the state into an investment Hub. “

To Conclude, he congratulated everyone and assured that more such ASKs shall be opened in UP in the near future to ensure ease of living to the residents. With 4 more Aadhaar Seva Kendras opening today at Gonda, Varanasi, Saharanpur and Moradbad, Rajeev Chandrasekhar assured the citizens of UP that the march towards Digital Uttar Pradesh will be swifter than before.

Quiz bee has Emerged as a Viable Career Option for Students

iednewsdesk Jan 28, 2022
Protected areas are important for maintaining populations of various species. They ensure that many animals and…