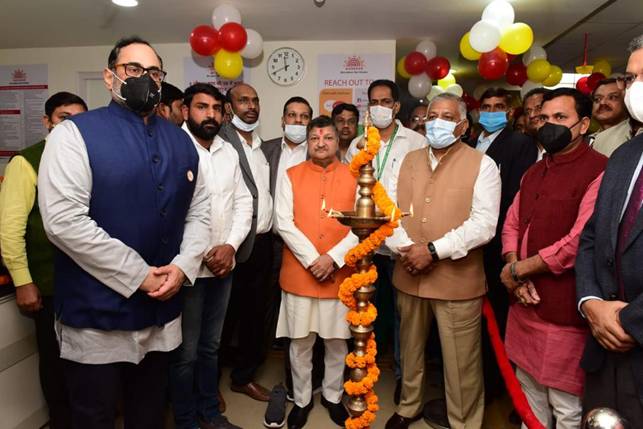 Rs 1.78 lac crore – savings made to public exchequer owing to use of Aadhaar and DBT : Rajeev Chandrasekhar

New Delhi: Rajeev Chandrasekhar, Minister of State for Skill Development & Entrepreneurship and Electronics & Information Technology and General (Dr) V.K Singh (Retd), Minister of State for Road Transport & Highways and Civil Aviation jointly inaugurated the 5th Aadhaar Seva Kendra in UP at Ghaziabad today. The ASK has a capacity to handle request from 1000 residents per day.
On this occasion, Rajeev Chandrasekhar congratulated everyone and said that this public facility is dedicated purely to the residents of Ghaziabad. He mentioned about his old connect with the city as he spent 2 years of his life, as a student, staying at the Hindon airbase, since his father was an officer in the Indian Airforce.

He spoke about the vision of PM Narendra Modi on Digital India which lays out 3 broad outcomes for Technology to achieve in a developing country like India. These are :-

He highlighted the achievements of the Digital India Campaign over the last 6 years and remarked that 100 paise released from the Government of India towards welfare of poor and needy, now reach into their accounts at the click of a button. This he contrasted with the statement given by a former PM back in the 80’s where he admitted that only 15 paise out of 100 paise released by the Central Government reaches the beneficiaries.

He also cited the example of indigenously developed CoWIN platform that has facilitated vaccination of over 100 crore people in India and is now the most sought after platform among various counties for managing their vaccination programme.

He credited the success of this transformation to the vision of PM Narendra Modi towards use of technology for Direct benefit transfer by making use of Aadhaar that has plugged all leakages from the system and prevented corruption.

He later added that the savings made to public exchequer owing to use of Aadhaar and DBT, primarily due to weeding out of fake and duplicate beneficiaries, have been estimated to be to the tune of Rupees 1.78 lakh crores (as on Mar 2020; as per DBT Mission, Cabinet Secretariat).

Speaking on the occasion General (Dr) V.K Singh (Retd) thanked government for starting the ASK in Ghaziabad. He said that this centre will make aadhaar related services for residents easy. Now people can update their aadhaar and also enroll for Aadhaar at the centre.

Shri Saurav Garg, CEO UIDAI said that UIDAI plans to operate 166 ASKs in 122 cities throughout India. So far establishment of 58 ASKs completed and started functioning. All the ASKs are air-conditioned, designed with adequate seating capacity and also Divyang friendly.

He emphasized that UIDAI is moving forward by making aadhaar services easier for citizens. In this direction we are focusing on online aadhaar updation services where residents can update their aadhaar using mobile app and also by visiting the self service update portal of UIDAI he added.

Speaking on the occasion Shri Nitish Sinha, ADG, UIDAI RO Lucknow said this that this is the 5th Aadhaar Seva Kendra in UP after Agra, Lucknow, Prayagraj & Meerut. He further further said that dry run has started in ASKs at Gonda & Varanasi and very soon the dry run will start at Moradabad & Saharanpur.

UP has achieved Aadhaar saturation level of 90.66% (with respect to projected population of 2021).

To provide Aadhaar related services, 10,400+ Aadhaar kits are functional in UP (which includes 2700+ CSC BCs and 3000+ IPPB CELC Kits). These kits have carried approximately 5.17 Lakhs new Aadhaar enrolment and 22 Lakhs updates during last one month.

In Ghaziabad district itself, 145 Aadhaar kits are functional (which includes 21 CSC BCs and 38 IPPB CELC Kits). These kits have carried approximately 9 thousand new Aadhaar enrolment and 33 thousand updates during last one month.