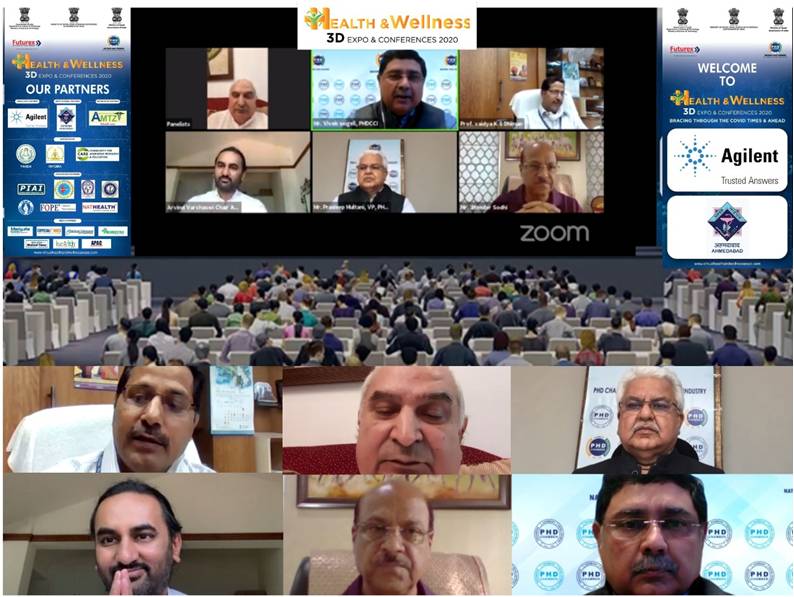 Rs. 4000 Crores sanctioned to NMPB, Ministry of AYUSH, Govt. of India to make medicinal plants & herbs better and cheaper and will double income of farmers and there is a need to link our education system to knowledge of AYUSH

Mr. Pradeep Multani, Vice President, PHD Chamber in his Presidential address spoke how the entire system of Ayurveda has received more recognition globally during last few years. Mr. Multani also talked about the wellness Industry and the overall growth of its market size in India. He said that the Hon’ble Prime Minister of India has been actively promoting the entire AYUSH & its benefits for taking the system ahead.

Mr. Jitender Sodhi, Managing Director, AYUSH Herbs Pvt Ltd said Ayurveda has been playing a major role during the ongoing pandemic times. Mr. Sodhi said that there’s an immense demand of Ayurveda immunity booster products in the market for building the immunity. He mentioned that by following basic hygiene measures like wearing mask and following social distancing guidelines could help during the current scenario. He said that the entire Industry has faced various challenges and has overcome it very quickly. He said Ayurveda has a vital role to play in building immunity and can save be a life saver during these times.

Mr. Arvind Varchaswi, Chairman, AYUSH Committee said that the entire AYUSH System holds great importance globally. The AYUSH system for the first time, has been recognized as essential commodities and services by the Ministry of AYUSH, Govt. of India. Mr. Varchaswi also said that there are lot of prospects for the entire AYUSH system in the future. He also talked about mental health and how Ayurveda could play a significant role in taking entire AYUSH system forward. He said that during the ongoing COVID times, yoga and pranayam can be highly beneficial in various ways. He said the Yoga will definitely help in taking the Ayurveda systems to the International level. He also emphasized on the need to build the education system of AYUSH disciplines.

Prof. Vaidya K.S. Dhiman, Director General, CCRAS, Ministry of AYUSH, Govt. of India thanked all the panellists for joining the session. He said there’s a need to follow a balanced diet, maintain a healthy lifestyle and practice yoga to tackle the ongoing pandemic situation. He also explained about the scenario post pandemic and said there’s a need to follow a seasonal diet, which could be helpful during after the pandemic. He said the AYUSH system should be recognized as a system of healing. He added that there is a need to promote research in the field of AYUSH. He said that the Chinese system of medicine follows different norms, which should be implemented in the Indian system of Medicine.

Prof. Vd Dhiman said the Rs. 4000 Crores have been sanctioned by the Ministry of AYUSH, Govt. of India to National Medicinal Plant Board to make the quality of the ingredients better and cheaper with an aim to double the income of farmers. He said that the demand for Ashwagandha has also increased one hundred times recently and there’s a shortage in the current market. He added that there is need to recognize the efforts of AYUSH doctors with dignity at par with others.

Padma Bhushan & Padma Shree Awardee Vd. Devendra Triguna, President of AMAM, All India Ayurvedic Congress and Ayurveda Mahasammelan in his address, talked about the AYUSH Karha which was distributed in New Delhi to all policemen for building their immunity during pandemic times. He also mentioned that the exports of the Ayurvedic products and ingredients have increased during the COVID-19 period. He mentioned about the ‘Dhupan Samagari’ which on fumigation can prevent the spread of Covid and also purifies the body.

The session ended with the concluding remarks by Mr. Pradeep Multani thanking all the panellists, attendees, partners, sponsors, exhibitors and industry members for their participation. The session was attended by more than 150 people through Zoom, YouTube and the expo platform.