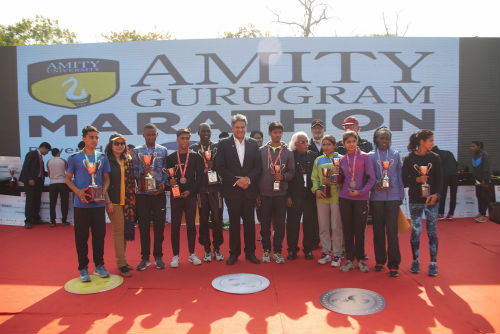 Gurugram: Amity University Gurgaon, with support from Gurugram Police, on Sunday held its prestigious annual Amity Gurugram Marathon (AGM). Runners including professionals, students, police officers, NGO volunteers, conditioned athletes, runners and walkers and more than 18,000 participants from all over country joined this Marathon This is one of the biggest marathons in the National Capital Region and has seen a surge in participation ever since it started five years ago. The Marathon has been recognized by the Athletic Federation of India.

In the 42.2 km category, the winners were Anita Chaudhry in women’s and athlete Felex Cheruiyot Rop in men’s category.

“At Amity, we diligently pursue the spirit of sportsmanship and good health through a series of programs and actions, including Marathon. What makes Amity Gurugram Marathon unique is our endeavor to weave together a wide coalition of NGOs and social actors to drive awareness, and trigger action on social problems. We aim to expand the idea and network of social good,” said Chancellor of Amity University Dr Aseem Chauhan.

To this end Amity Gurugram Marathon has tied up with NGOs and will be helping those NGOs to spread awareness about the causes supported by them and also for fundraising and volunteering. The marathon acts as a platform for the NGOs to create a coalition of socially conscious citizens who can contribute to bring positive change. Large number of NGOs including Akshaya Patra, Amity Humanity Foundation, Care, Oxfam India, Save the Children are part of the marathon. Dr Chauhan added, “Through this marathon we are not only celebrating diversity with fitness but also aim to create a positive impact on our society, through awareness and social action.” He further said, “the Marathon propagates values of spirit and sturdiness and is driven by our endeavor to nurture holistic world citizens, who are driven by human values and equipped to excel on a global stage.”

Amity Gurugram Marathon is divided into four formats for various age groups – 42.2, 21.1, 10 and 5 kms. The marathon attracts a diverse and vibrant set of thousands of running enthusiasts, right from corporate honchos to professional athletes who compete at an international level. The Amity Gurugram Marathon is an annual event organized by Amity University Gurugram which is a leading research and innovation driven University having a 110 acre campus at Gurugram and a part of the Amity Education Group.