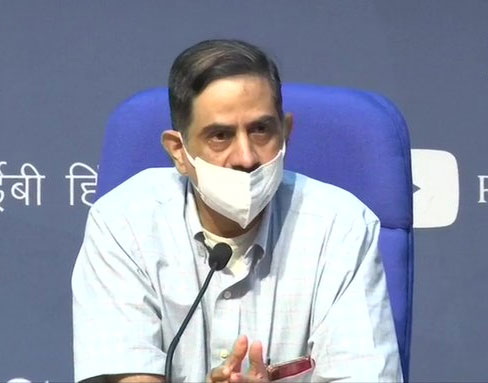 Russian vaccine has not yet completed Phase 3 trial, in talks for conducting Phase 3 trial in India: DG, ICMR

New Delhi: In this week, more than 38.59 lakh patients have recovered from COVID-19 in India, which is one of the highest in the world. According to the Johns Hopkins University Coronavirus Resource Center, this is the highest number of recoveries in the world. This apart, more than 5.8 crore tests have been conducted so far, out of which, more than 76 lakh tests were conducted in the last week. Presently, active cases are only one fifth of the total COVID-19 cases so far. This has been stated by the Secretary, Ministry of Health and Family Welfare, Shri Rajesh Bhushan in course of a media briefing at National Media Centre in New Delhi today.

Stating these, the Health Secretary presented a graph showing the daily average of new cases in a week-on-week basis, starting from first week of July, in the top 5 states, that is, Maharashtra, Karnataka, Uttar Pradesh, Andhra Pradesh and Tamil Nadu. The graph shows an increasing trend of cases in Maharashtra, while stabilization is observed over the last three weeks in Karnataka. Again, the graph of Uttar Pradesh shows a rising trend, while stabilization over the last three weeks is also observed in Andhra Pradesh and Tamil Nadu shows initial signs of decline in the number of cases.

A similar graph plotting the trend of daily average deaths in a week-on-week basis in the top five states, shows an increasing trend in Maharashtra, while it shows a certain stabilization in Karnataka. A rising trend of deaths is also observed in Uttar Pradesh, while Andhra Pradesh is showing early signs of decline over the last three weeks and Tamil Nadu is showing signs of decline over the last four weeks.

This apart, India, having 3,573 cases per million, still counts amongst the lowest in the world. Similarly, in terms of deaths count also, India, with 58 deaths per million, is amongst the lowest in the world. India’s present count of active cases is only 20.08% of the total cases, while 78.28% of the patients have recovered. A progressive rise in testing is also taking place. In a period of only 10 days, one crore tests have been conducted. When the number of tests is studied in tandem with positivity rates of respective states, it is found that Maharashtra has a positivity rate of 21.5% and hence, requires to increase testing. The states having high positivity rates will have to further ramp up their testing and the states should aspire to keep their positivity rate below the national average (8.4%), stated the Health Secretary.

In reply to a media query on oxygen supply for COVID-19 patients, the Health Secretary stated, while India has a capacity of manufacturing 6,900 Metric Tonnes oxygen on a daily basis, around 2,800 metric tonnes of oxygen are required for COVID-19 and non-COVID health use, while around 2200 metric tonnes are used up for industrial purposes. Hence, at the national level there is no shortage of oxygen and today morning, there was a surplus of 1,900 metric tonnes of oxygen. Further, as per today morning’s report, roughly 6% of COVID-19 patients nationally required oxygen support. Stating these, the Health Secretary said, the problem arises when there is no oxygen inventory management and when there is a possible shortage of alert generation mechanism at the hospital level which needs to be monitored by states and UTs, so that replenishment can be done in a timely manner. He added, Health Ministry has held detailed meetings with states, in which it has been advised to start a control room for monitoring oxygen supply and requirements on a daily basis. A virtual control room has also been started at the level of the Union Government, where a Joint Secretary each from the Health Ministry and the Department of Industries, and an officer each from PESO and DCGI are in charge. Their contact numbers and email IDs are in public domain.

In reply to a query on the latest updates on vaccines, DG-ICMR, Prof. (Dr.) Bhargava stated, Cadila and Bharat Biotech’s Phase 2 trials are under process, while Serum Institute is about to start its Phase 3 trials at 15 sites in the country. Speaking about the vaccine developed in Russia, he said, their first study of 76 patients has been published in the journal Lancet, which is showing good effectiveness and immune-antibody generation. He further added, they have not yet completed a Phase 3 trial. Dialogues are going on between the High-Level Committee on Vaccines and the Russian diplomats about the mechanisms for conducting a Phase 3 trial in India, added the DG-ICMR.

Answering a media query on effectiveness of plasma therapy, Dr. Bhargava said, randomised control trials conducted on 464 patients at 39 hospitals in 25 districts across 14 states/UTs has shown that it does not reduce mortality or prevent progression from moderate to severe disease. However, the DG-ICMR also clarified that these findings are under peer-review. The National Task Force and Joint Monitoring Group of the Ministry of Health and Family Welfare will take a decision on continuity of plasma therapy once the full publication comes out after peer review of the findings. “There are a few cases where reactions can occur and that is why we will take a considered view once we get the full publication of this study”, stated DG, ICMR.

In reply to a query, Health Secretary stated, recently a guidance note on countering post-COVID complications has been issued.

University of Birmingham: World-first UK trial to assess whether…

University of Glasgow: Scottish And Irish Researchers To Investigate…