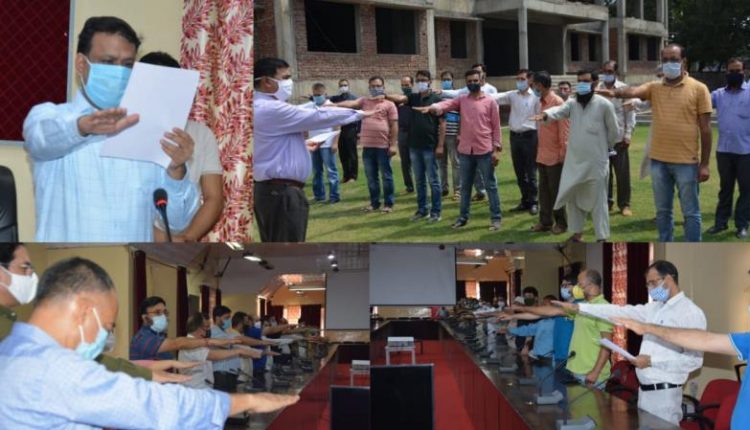 JAMMU : ‘Sadbhavana Diwas or Harmony Day’ was today celebrated across the Jammu Division with the objective to encourage national integration, peace and communal harmony among the Indian people of all religions.

The Day witnessed pledge taking ceremonies at district level functions and down the administrative units, while similar events were held in offices and educational institutions. The Day is observed to commemorate the birth anniversary of India’s Former Prime Minister Rajiv Gandhi.

District administration Doda observed Sadbhavana Diwas or Communal Harmony Day at the Conference Hall of the DC office with enthusiasm and zeal.

The Pledge of Sadbhavana was administered by the Deputy Commissioner, Vikas Sharma to the officers/ officials working in the DC office complex.

In a separate program, the Additional Deputy Commissioner, Dr R K Bharti also read out the pledge to his staff in the DC office complex.

Similar programs were also organised across the district wherein the concerned Officers of various departments administered pledge to their staff.

Deputy Commissioner, Mussarat Islam administrated the pledge to employees to work for the emotional oneness and harmony of all the people of India regardless of caste, region, religion or language and to resolve all differences among people through dialogue and constitutional means without resorting to violence.

Similar programs were also organized by the various departments and other organizations across the district.

Like other parts of the country, Sadbhavana Diwas was also celebrated in the district Headquarter Udhampur.

Additional District Development Commissioner, Kanta Devi administered the pledge to all the Officers/ Officials on the occasion.

The ADDC said that the main theme of the Sadhbhavna Diwas is to promote national integration and communal harmony among the people of all religions, languages and regions and promote good will amongst the masses. All the officers and officials took pledge that they will work for the emotional oneness and harmony of all the people of India regardless of Caste, region, religion or languages and resolve all differences through dialogue and constitutional means without resorting to violence.

While speaking on the occasion, the Director Horticulture said that the day is observed to encourage national integration, peace, affection, and communal harmony among the Indian people of all religions and ‘we should promote these in our life.’ All the employees of this office participated in this ceremony with full enthusiasm.

Sadbhavana Diwas was observed in all units/sub units of District Police Doda. The Main Function was organized in the District Police Line where IC Senior Superintendent Police, Abdul Qayoom administered the pledge to Jawans and officers.

The pledge ceremony was also held in all Subordinate units of District Police on the occasion of the Sadbhavana Diwas. They all pledged to work for emotional oneness and harmony of all the people of India regardless of caste, region, religion and language.

Additional Deputy Commissioner, Sachin Dev Singh; DSEO, Bilal Rashid Mir, District and sectoral officers besides senior citizens and people from all walks of life were present on the occasion.

Sadbhavna pledge was also administered to all the participants during the event.

Deputy Commissioner Rajouri, Rajesh K Shavan said that Rajiv Gandhi had the vision of a developed nation via many national as well as international projects that he pioneered.

Deputy Commissioner Rajouri district is known all over the UT and country for its rich cultural heritage and Communal harmony among people of different faiths. He also added that no divisive force should ever be allowed to disrupt this peaceful atmosphere.

Workshop on safe use of pesticides, adoption of best practices for Basmati production held at Kathua