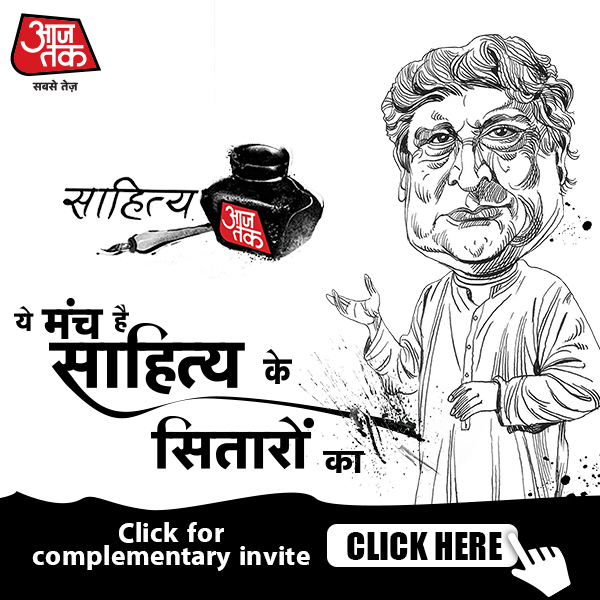 New Delhi: Aaj Tak announces the 2nd Edition of the successful literary festival, Sahitya Aaj Tak – a three-day Hindi Literature Festival and one of the nation’s biggest confluence of the greatest names from various disciplines of literature. The festival is scheduled for the 10th, 11th & 12th of November at the Indira Gandhi National Centre for the Arts, New Delhi.
The literary festival this year promises to be much bigger with the addition of many more names to the illustrious list of literary figures. Besides the legendary writers of the country, the audience will also get a chance to listen to luminaries from diverse backgrounds like sports, theatre and politics.
Sahitya Aaj Tak’s forthcoming chapter is going to inspire and spawn a new generation of writers and thinkers and will give a glimpse into the heart of storytellers. The play ‘Gardish Mein Tare ‘ by Arif Zakaria and Sonali Kulkarni along with free performances by Mame Khan and Nooran sisters will add charm to the literature festival.
SAHITYA AAJ TAK is a festival unlike any other and brings together the biggest names in HINDI LITERATURE with more than 100 Scholars, Poets, Writers, Musicians, Actors, Authors and Artists, making this the most avidly followed literature event. The doyens of literature at the event include – Javed Akhtar, Karan Johar, Kumar Vishwas, Prasoon Joshi, Piyush Mishra, Chetan Bhagat, Chandra Prakash Dwivedi, Hans Raj Hans, Jaideep Sahni, Rachna Bisht Rawat, Diksha Dwivedi, Manzar Bhopali, Alok Shrivastava, Sheen Kaaf Nizam, Ashok Vajpeyi, Mame Khan, Manager Pandey, Anuja Chauhan, Devdutt Pattnaik, Ashwin Sanghi, Sudeep Nagarkar and Yatindra Mishra among others.
The festival will not just showcase cultural shows and theatre but also promises to give budding writers, a vibrant audience to narrate their scripts and an opportunity to come on a common platform with Publications and Literary agents. To know more or to register log on to http://specials.indiatoday.com/specials/sahitya/registration.jsp