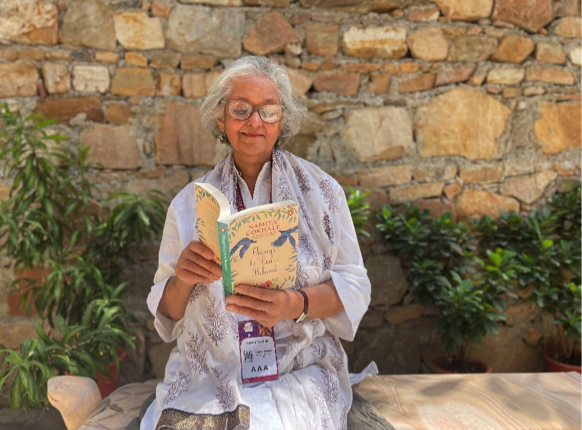 New Delhi, 11 March 2022: Penguin Random House India is proud to share that Sahitya Akademi presented the award in the English category to Namita Gokhale for her 2016 novel Things To Leave Behind at Festival of Letters 2022 held in the capital on 11 March 2022. Due to the ongoing annual literary event, Jaipur Literature Festival, of which Namita Gokhale is the co-founder and festival director, she was unable to attend the award ceremony. The prize was accepted by her niece on her behalf.

Speaking on the occasion, Namita says, ‘Being awarded the Sahitya Akademi award is possibly the most meaningful honour I’ve ever received. The Sahitya Akademi does inspirational work in keeping alive the diverse legacy of Indian languages. It gives me great personal satisfaction to be included among the canonical community of Indian language writers where I feel I most belong.’

The editor of the book Manasi Subramaniam, also the Associate Publisher at Penguin Random House said, ‘Things to Leave Behind by Namita Gokhale forms a complex and rich tapestry of historical events. Its women are rebels, and its landscape is almost a character. This award recognizes the novel’s extraordinary relevance, and we are so proud to be Namita Gokhale’s publishers.’

Namita Gokhale is an award winning writer and festival director. She is the author of eleven works of fiction and has written extensively on myth as well as the Himalayan region. Her acclaimed debut novel, Paro: Dreams of Passion, was published in 1984. Her recent novel Jaipur Journals, published in January 2020, was set against the backdrop of the vibrant Jaipur Literature Festival. Betrayed By Hope, a play on the life of Michael Madhusudan Dutt, was also published in 2020. Her twentieth book, The Blind Matriarch was published in 2021.

A co-founder and co-director of the Jaipur Literature Festival, Gokhale is committed to supporting translations and curating literary dialogues across languages and cultures. She was conferred the Centenary National Award for Literature by the Asam Sahitya Sabha in Guwahati in 2017. She won the Sushila Devi Literature Award for her novel Things to Leave Behind, which also received the Best Fiction Jury Award at the Valley of Words Literature Festival 2017 and was on the longlist for the 2018 International Dublin Literary Award.

About Things To Leave Behind

Kumaon, 1856. History has already begun its steady march. Six native women clad in black and scarlet pichauras huddle around Naineetal Lake, attempting to cleanse it of ominous influences. These are the days of Upper Mall Road (for Europeans and their horses) and Lower Mall Road (‘for dogs, servants and other Indians’). Amidst a theatre of British impunity, feisty young Tilottama Dutt, whose uncle is hung when he protests the reigning order, and her daughter, Deoki, confront change as Indians and as women.

Things to Leave Behind brings alive the romance of the mixed legacy of the British-Indian past. Full of the fascinating backstory of Naineetal and its unwilling entry into Indian history, throwing a shining light on the elemental confusion of caste, creed and culture, illuminated with painstaking detail, here is a fascinating historical epic and Namita Gokhale’s most ambitious novel yet.

Zhejiang University: A big story in the miniatures of Chinese timber structure

Oregon State University: Rev up for gardening season with a plant sale

Australia’s capital Canberra: a wonderful place to live, learn and…